India’s city landscape is leapfrogging each year, further and further away from the beautiful designs of the past. Most of these traditional house designs still flourish in villages or, more rarely, in the secluded, untouched suburbs of the cities. If you’re in the market for a house or flat you may find yourself wondering where those beautiful houses have disappeared and if there’s any chance you can get your hands on one or convince your architect to add a little touch of vintage India to your home. It certainly is still an option but curious to know what were these designs and where did they come from?

When it comes to Rajasthan, you cannot miss the havelis in this vibrant state. There is a fine blend of Hindu Rajput and Mughal architecture that reveals itself in the colours, carving and the look of the property. Rajasthani craftsmen developed some of the unique and enticing architectural forms when they blended styles, to come up with jharokhas, chattris, baodis, jaalis and johad. Today, such properties are an attraction for tourists and short-term visitors who visit cities in Rajasthan and are mesmerised by the intricate work in these beautiful properties.

The haveli became a notable choice among the affluent Marwaris of Rajasthan but the term haveli is derived from the Persian word hawli that meant an enclosed place. A typical characteristic of the haveli was the courtyard. Some havelis even had two courtyards where the outer one was meant for the men while the womenfolk used the inner, more private spaces. One of the advantages of having these courtyards is that this part was airy, well-ventilated and given the dry, hot climate of Rajasthan, courtyards in havelis lent a refreshing space for the inhabitants to relax. 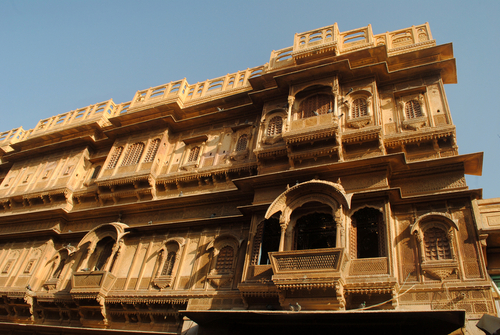 The haveli could be made of sandstone, marble, wood, plaster  or granite in various combinations but what these Rajasthani traditional houses boast of, is the craftsmanship. The exterior of such havelis were always grand. Moreover, the carvings enabled adequate shade within the property  and ensured that it was never too hot. The jharokhas added an aesthetic charm. 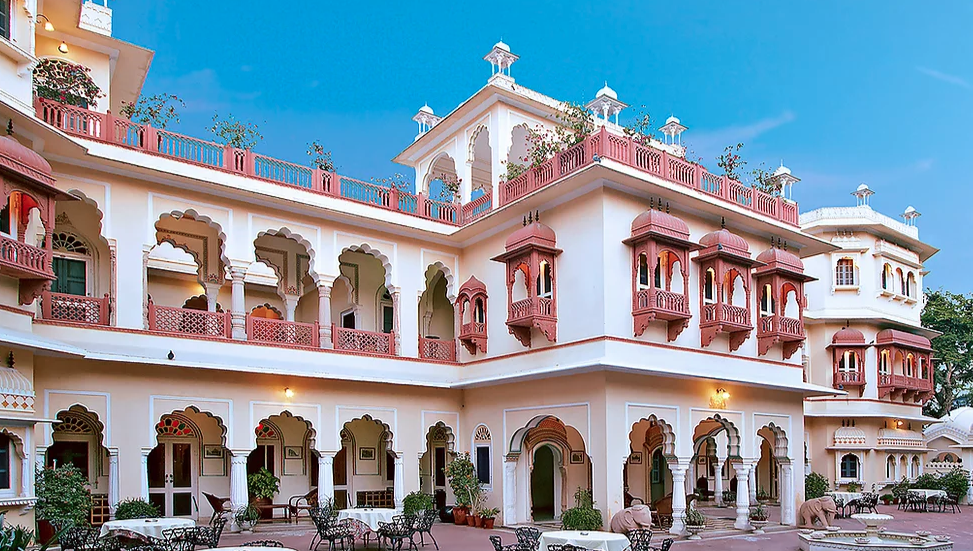 Have you noticed that the havelis of yore were close, with not a lot of space between two buildings. It served two purposes – one, it lent adequate shading and second, it helped different households to bond without leaving their premises.

How many floors a haveli should have, was ascertained by the number of members in the family. Most traditional homes belonged to joint  families as this was the norm of the times.

Kerala’s architecture even in the modern-day, is a delight. However, traditional homes and the style of yester-years is something that Keraliites love to bring back. Some of the features included the steep roof that would withstand heavy rains, tall pillars, large courtyards and gable windows. 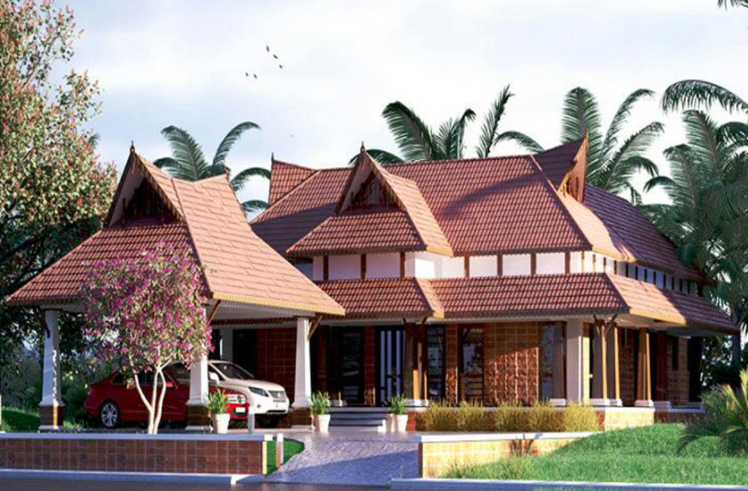 Other notable features were the padippura that is a roofed entrance to the house, the poomukham or the entrance verandah that had a sloping tiled roof with pillars and a chuttu verandah that connects either sides of the house. A charupadi is the seating in the verandah where you could sit and enjoy the view and was often a spot where families socialised with guests or each other. Each traditional house had an ambal kulam or a pond, as well, at the end of the chuttu verandah.

Within the house, a courtyard was usually in the middle of the house. This open area divided the property into four sides. Many families preferred keeping the tulsi plant in this spot to allow air purification naturally.

Keralites and art cannot be separated and this is evident in the way traditional homes in Kerala displayed mural art, mostly depicting stories from mythology. 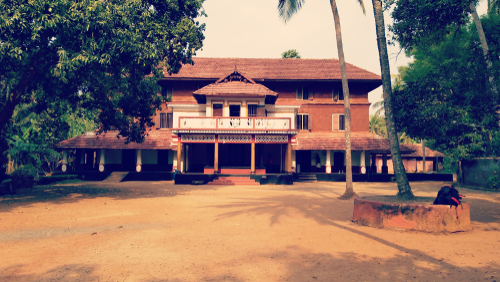 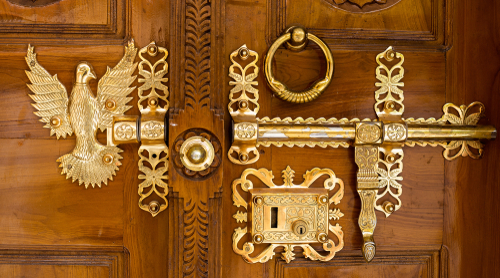 South India’s traditional architecture is sometimes considered synonymous with the state of Tamil Nadu’s Agrahara-style neighbourhoods. A classical Tamil house exemplifies the state’s primarily Hindu roots with these Agrahara, or Agraharam, Brahmin houses, considered a staple example of their architecture. The name itself derives from the manner in which these houses are laid out in a village, which was like a garland. It comprises of houses laid along a street leading to the village’s primary temple either devoted to a single deity or one at either end devoted to different deities. 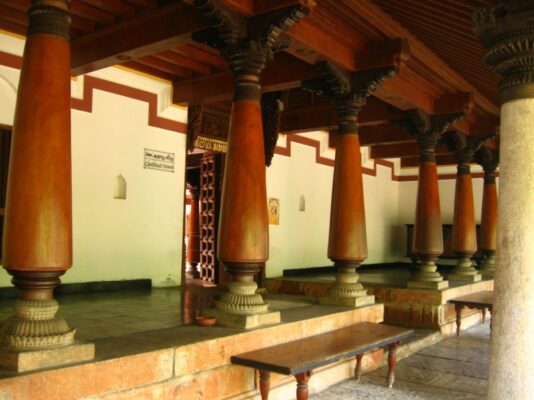 Each house had a wide verandah out front or one that ran around the house called a thinnai where you could relax or socialise away from the heat of the day. Large, ornate wooden pillars supported the terracotta roof of the thinnai. Interestingly enough, while the terracotta is now considered typical, it was a luxury when it first began and only the rich received special permission from royalty to use it. Other families used the more modest thatch roof. The most extravagant piece in any of these houses, which is a feature that survives to this day, is the front door, which is always intricately carved. Another feature of these traditional house plans includes the red oxide coated floors, which are known to retain coolness even in the warmer seasons.

These Indian houses proved to be a passive form of architecture with little damage to the environment while maintaining a cool climate within the house irrespective of the outside environs. The thatch or tile roof kept the heat at bay, and the sun-baked brick or mud walls had antiseptic properties keeping insects away. Bamboo was woven into mats to sit on or to use as walls.

The culture surrounding these beautiful houses was communal as most of the village was involved in the construction. Trees outside the owner’s property could not be felled without the village elders’ permission; carpenters were involved in this and the creation of the ornate pillars and   doors. The local blacksmiths were called in for the hinges and other implements while the potters created the terracotta tiles. This work resulted in a beautifully collaborated piece of architecture that survives and inspires people to this day.

If Tamilian architecture focused on the heat, the Assamese had concerns regarding the seismic activity. The main thing to keep in mind here is – lightweight. These quaint little houses were, at the most, one storey high and constructed from material like bamboo and timber with metal sheets or thatch used for the roofing. In fact, the name for these Assam-type houses, Ikra, derives from the reeds used in the walls. This method has been in practice for over two centuries now, with modern implements added along the way to create the charming houses the state is known for. 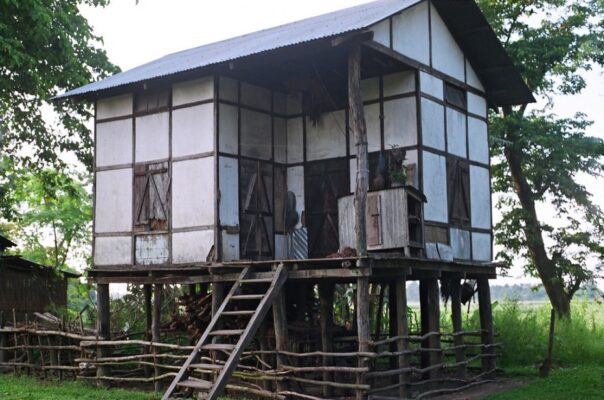 The most popular architectural form is the Chang house, which is probably what you imagine when you think of the North-East. These traditional house designs feature bamboo walls raised by stilts and typically found in hilly regions; this construction was inspired by the frequent flooding and landslides. In general, homes are one storey high due to the threat of earthquakes.

These houses are also an extremely social creation with open spaces at both ends for people to be seated. Most of these Indian house plans feature gardens in the out front where some families cultivate some of their own crops. The kitchen usually lies at the heart of the house in this joint family culture.

Traditional Punjabi homes are all the rage in Bollywood movies. These homes revolve around an agricultural, joint family culture set within a rustic yet elegant house. 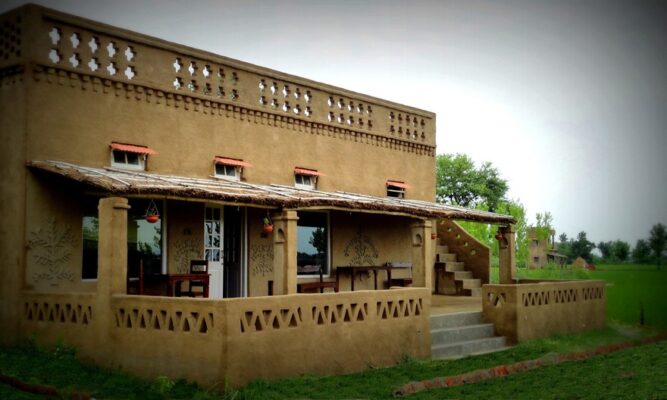 The main identifier of a Punjabi traditional house plan is the courtyard with small flower beds or a small orchard in the centre of it, here you have your celebrations and pujas, and some of these Indian house designs have doors leading into their neighbour’s’ yards.

These houses are composed entirely of baked bricks with timber doors, ideal for the sweltering heat. A cattle pen is usually set within the courtyard – the one feature that hasn’t carried forward to the urban version. The baithak, or living room, lies at the centre of the family’s socialising with simple furniture like charpais spread out. All other rooms lie lateral to it with the courtyard leading off it and a door that opens out to the street. Meanwhile, the verandah that runs all along the house is where most household activities and daily female socialising take place. All this lies wrapped behind a baked boundary wall with idyllic painted doors leading into the street or the next door house.

The ever-popular bungalow has its roots in colonial Bengal where the British assured the creation and continuation of European and Indian architecture mixed together in these houses. These one-storeyed villas yet again had a wide verandah that the colonial officers used as a reprieve from the humidity of the Bengal summer. Simple Corinthian columns ran along these verandahs as most of the buildings raised during this period mimicked the house designs of the colonial times. 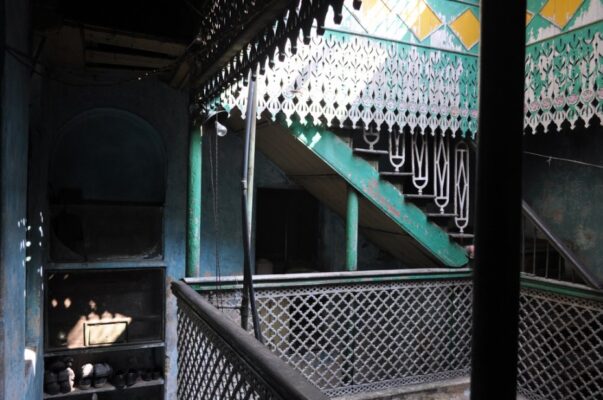 These homes had large centred courtyards or Aangals with the Vrindavan or tulsi plant set in the middle of it. Along one side of this courtyard is a puja mandap with apses set behind ornate arches where the idols are placed. Next to this is usually where the women’s pavilion, a balcony from where women could watch the goings on of the street below, is set. The bedrooms are set along the opposite side of the courtyard with the Zenana or female quarters placed on the final side at a distance from the living room. The living room, in addition to the verandah, was used to receive and entertain guests or by officers’ to hold meetings. The various sections’ floors were all connected by curved corridors and winding stairways.

The furniture set within was just as extravagant with ornate four-poster beds with canopy curtains draping them, and carved sandalwood tables and chairs, while the walls were adorned with paintings. The gardens were also very spacious and carefully maintained with beautiful fountains and birds laid through them.

If you’re confused about the architecture of your unbuilt house, go with the long-established Indian arts and designs. Model your dream home with an inspiring traditional house plan that features an aesthetically pleasing style of living. Take your pick for a traditional domestic look.

How are traditional Kerala houses identified?

What are the residences traditionally called in Maharashtra, India?

Maharashtrians address the usual housing as wadas. This again is of two types, while one resembles the apartment-style living, the other is chawls. The wada architecture comprises ornamentation, fenestrations, hints of religious influence, etc.

Where do the traditionally rich of Delhi live?

The traditionally rich in Delhi live in south Delhi. The nouveau rich also have properties across south Delhi but it was also the site of the well-settled industrials and aristocrats much before them. As of now, many old constructions have given way to redevelopment while some remain disputed.

9 Tips for a Beautiful Balcony Garden. 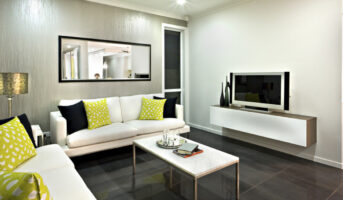