The Delhi Metro’s Phase 4 (Phase IV), has been planned to provide last-mile connectivity to the new housing hubs in the National Capital Region (NCR). Initially, the completion deadline was set as 2022 and the work on the project was expected to begin in 2017. However, the project has faced several delays. Work on Phase 4 finally began on December 30, 2019, with a ground-breaking ceremony for piling work for stations along the Janakpuri West-RK Ashram Marg corridor, being held at Haider Badli Mor. The 104-km Delhi Metro Phase 4 network, is expected to cater to 1.5 million passengers daily, when fully completed. The route is expected to finish by December 2024 but may get delayed due to Covid-19 induced lockdown. The Delhi Metro Phase 4 project covers three approved corridors, Maujpur to Majlis Park, Janakpuri West to RK Ashram, and Tughlakabad to Aerocity, spanning a total length of around 65 kms.

Construction works on the three corridors of the Phase IV, namely, Inderlok – Indraprastha, Rithala – Bawana and Lajpat Nagar – Saket, has faced delays due to the COVID-19 pandemic. However, the work on Maujpur-Majlis Park along with other corridors of Metro Phase IV, namely, Janakpuri West – RK Ashram and Aerocity – Tughlaqabad is in progress. The Maujpur-Majlis Park stretch is expected to be completed first. The Lajpat Nagar-Saket section will be the shortest corridor under Phase IV and will serve as a link between the Magenta Line (connecting Botanical Garden to Janakpuri west) and the Pink Line and the new metro line in Delhi from Tughlaqabad to Aerocity.

The Project Investment Board of the Centre, under the Ministry of Finance, recently approved the three Delhi metro upcoming projects of the Metro Phase IV, namely Rithala to Narela metro route (22.91 kms), Lajpat Nagar – Saket G-Block (8.38 kms) and Inderlok – Indraprastha (12.37 kms) spanning over 40 kms. The total cost is estimated to be around Rs 12,586 crore. The proposal will be placed before the union cabinet for final approval.

DMRC will soon begin the construction work for the underground section of the Aerocity – Tughlaqabad Silver Line corridor of Delhi Metro Phase 4. Tughlaqabad station will serve as an interchange station. The stretch will be operational by 2025. The 23.6-km line will be linked to the Violet line from Kashmere Gate to Raja Nahar Singh. A 100-metre subway will be built to link the existing station at Tughlakabad to the new interchange station. As per an official, tenders were awarded in March 2022 after required approval from Japan’s international agency. Once operational, the silver line metro corridor will provide connectivity for commuters in far-flung area of Faridabad in Haryana and will save time through the Tughlakabad interchange station. It will also reduce to travel time in reaching domestic and international airport terminals via the Airport Express Line to around 90 minutes.

The outgoing DMRC Chief, Mangu Singh, had said that some sections of the priority corridors are likely to be opened by March 2023. He also added that the final operationalisation of the entire Phase 4 project may get extended to March 2025 but the urban transporter is still working as per the completion timeline of December 2024.

Current status: This corridor might be built as a Metrolite

Current status: This extension to Kundli (Sonepat district) has been approved by Haryana Government.

Current status: DPR was sent to Uttar Pradesh government for approval in January 2020.

Current status: DPR was sent to the Uttar Pradesh government for approval in January 2020.

Also read all about the Pink Line Metro route 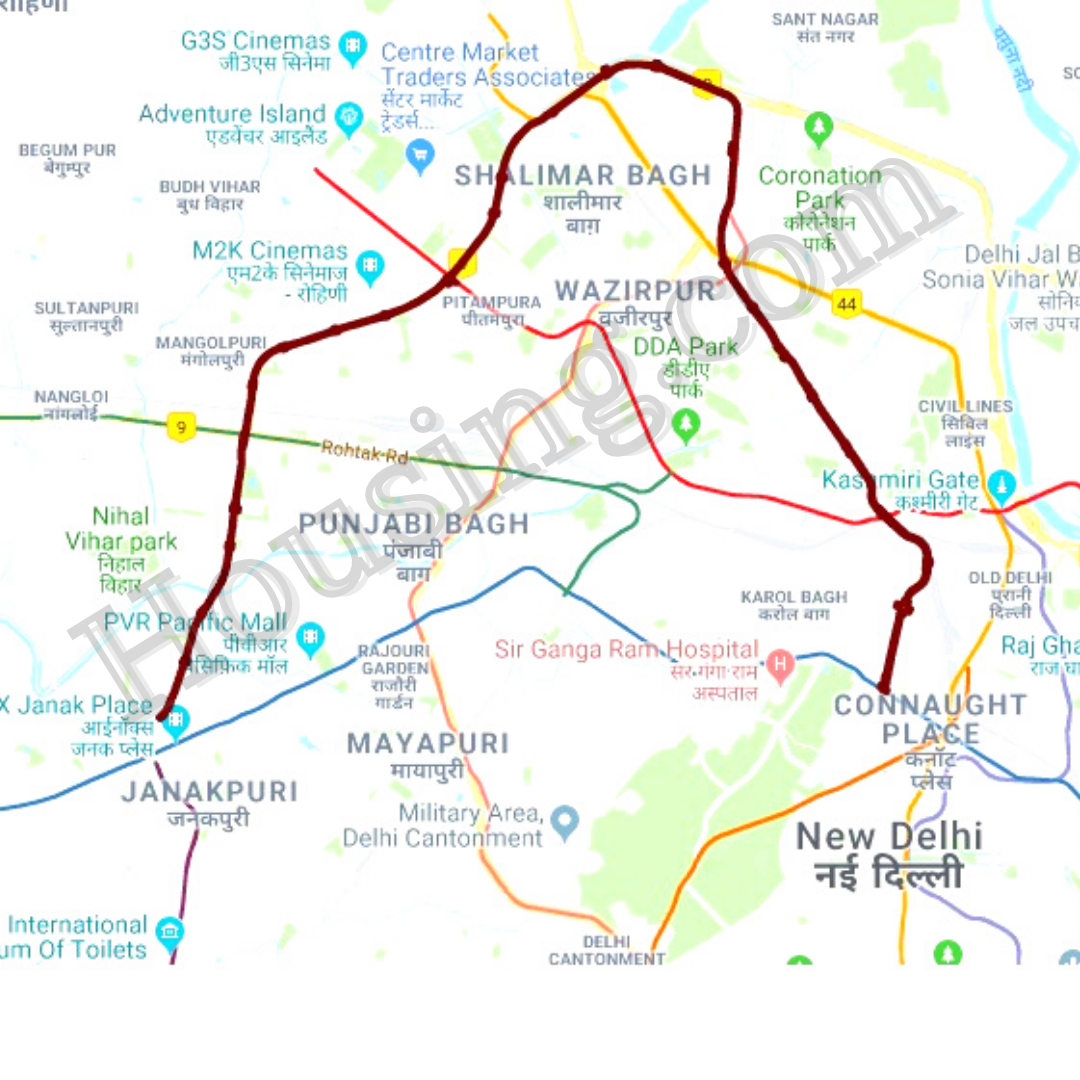 The Delhi metro phase 4 map shows the route of the approved and proposed corridors on phase 4 metro network, which includes the three corridors namely Aerocity to Tughlakabad, RK Ashram to Janakpuri West and Maujpur to Mukundpur.

The three approved metro corridors will have 14 interchange points that will include 12 new interchange points. Every fourth metro station on the Delhi metro phase 4 will become an interchange point. Thus, commuters will find it easy to change trains and reach their destinations quickly instead of taking longer routes.

The RK Ashram-Janakpuri West corridor will offer direct connectivity to the west, northwest and north Delhi region. It will cross the Green line (or the Interlok to City Park section) at Peeragarhi and the Pink line at Majlis Park and Azadpur. The Metro corridor will also intersect the Red line (or the Dilshad Garden to Rithala section) at Pitampura and Pul Bangash. It will also cross the Yellow line (HUDA city centre to Samaypur Badli section) at Haiderpur Badli Mor and Azadpur.

The Azadpur Metro station will serve as an interchange point for three metro lines namely the Yellow line, Pink line and Magenta line.

The 20-km Aerocity-Tughlakabad section will provide citizens easy access to different areas of south Delhi and the Indira Gandhi International Airport. The terminal stations will serve as interchange points providing link to the Violet line and the Airport express line. There will another interchange point at the proposed Saket G Block station.

What is Delhi Metro Phase 4?

The Delhi Metro’s Phase 4 is an expansion of the Delhi Metro network, to new housing localities in the National Capital Region. The government of India in March 2019, approved three routes as part of the project: Tughlakabad to Aerocity, Janakpuri West to RK Ashram and Maujpur to Mukundpur, covering 61.679 kms.

An underground interchange station will soon come up at the Chhatarpur Metro station on the Delhi Metro Yellow Line (from Samaypur Badli to Huda City Centre) and provide a link to the upcoming Tughlakabad to Aerocity route. While the existing Chhatarpur metro station is elevated and the upcoming station will be an underground station and a subway will link the two stations.

Also read all about the DMRC metro rail network

According to the DMRC Chief Vikas Kumar, a 2-km stretch of the Delhi Metro between Dwarka Sector 21 and the upcoming India International Convention Centre (IICC) is likely to be operational by July-August 2022. This will provide relief to people commuting from Noida and Ghaziabad on the blue line metro route.

To prevent issues related to land acquisition problem and approval from authorities, the DMRC plans to increase the capacity of the existing Mukundpur depot to serve the needs of the upcoming stations of Delhi metro phase 4 project. This expansion will help provide space for the Pink line extension from Majlis Park to Maujpur and Magenta line from Janakpuri West to RK Ashram Marg.

Work starts for underground section on the Magenta Line

The geotechnical and geophysical investigation work began in April 2022 for Package DC05 of the 28.92-km stretch from Janakpuri West to RK Ashram on the Delhi Metro Magenta Line. The Rs. 2481.50 crore contract of Package DC05 was awarded to Afcons Infrastructure.

The Delhi Development Authority (DDA) has given funds worth Rs 130 crore to the DMRC to expedite the development of the new Metro corridor at Narela as part of the Delhi metro’s upcoming projects under Phase 4. The DDA is developing Narela sub-city as one of its three sub-city projects to meet the rising housing needs. The Narela Metro will provide improved connectivity for those living in this area.

In February 2022, the DMRC awarded the first contract for the lease and maintenance of lifts and escalators for the three priority Metro corridors under Delhi metro phase 4. As per officials, the upcoming metro projects in Delhi will be completed under the public-private partnership model aimed at indigenising the Metro rail system. As per an official, the lifts under Delhi Metro phase 4 will have a higher carrying capacity of up to 20 commuters at one time, compared to earlier phases, where lifts, had carrying capacity of 8-13 passengers. Also, CCTV cameras will be installed in lifts for the first time.

The first-ever tunnelling stretch of Delhi Metro Phase 4 was completed at Krishna Park Extension on the Janakpuri West to RK Ashram Marg route. It was a milestone in DMRC’s construction work with a 73-metre long, Tunnel Boring Machine (TBM) breaking through after boring a 1.4-kilometre-long tunnel.

The South Delhi Municipal Corporation (SDMC) has decided to allot a portion of the municipal land in Vasant Kunj locality to the DMRC for the development of Phase 4 Metro station, according to officials. A proposal for allocation of the land was cleared by the civic authority by the house in a recent meeting. Leader of the house, Inderjeet Sehrawat, said that if the pocket was not made available, the DMRC would have had to change the alignment of the metro line. The land will be provided on a no profit, no loss basis, he added. The civic body will charge the DMRC at a rate of Rs 5.73 crore per acre, as per the proposal.

According to a recent statement by the DMRC, Delhi Metro will build the first-ever integrated flyover-cum-metro viaduct structure and a vehicle underpass, in association with Public Works Department (PWD), under the Delhi Metro Phase IV project. The structure will be constructed on the Pink Line’s Majlis Park – Maujpur stretch near Soorghat. The flyover and underpass are a part of a proposed elevated road along the Yamuna river, parallel to the ring road between Wazirabad Flyover (Signature Bridge) and the ring road near DND. The integrated structure will be erected over which the road flyover and a metro viaduct will be placed. The underpass is aimed at easing vehicular movement coming from north Delhi towards the Signature bridge.

The funding pattern for the three priority corridors was finalised in December 2019, with the cost of land being split 50:50 between the centre and the state. The centre will contribute Rs 4,643.638 crores, while the DMRC will have to repay external loans to the tune of Rs 12,930.914 crores. The Delhi cabinet, in December 2018, approved a contribution of Rs 5,994.50 crores.

See also: All about the Navi Mumbai Metro map

When will Delhi Metro Phase 4 start?

Construction work for 10 elevated stations along the Janakpuri West-RK Ashram Marg corridor started on December 30, 2019 and the civil work for these stations is likely to be finished in 30 months.

Is Metro ride free for ladies?

Although Delhi CM Arvind Kejriwal has proposed to make metro and bus rides free for women in the national capital, the scheme has so far been implemented only for buses. The DMRC has sought time to make necessary preparations.

Delhi government to adhere to existing funding mechanism for metro. 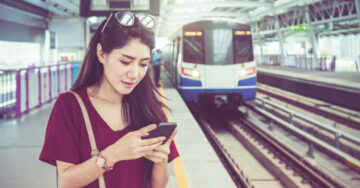