The 11-km stretch of the Old Mahabalipuram Road in the (OMR) Post-Toll market, is likely to cause the linear growth pattern of the OMR to diverge. Being strategically placed and well-connected to the key office markets of OMR and Grand Southern Trunk (GST) Road districts, the link road is gearing up to entice numerous multinational companies and small and medium enterprises, according to a recently released report titled ‘New Growth Centre in South Chennai’ by Colliers International.

Strategically located just after the toll, Pallavaram–Thoraipakkam Road (PTR), the link road between the parallel corridors of the GST Road and the OMR, is now emerging as a strong new growth centre in south Chennai. The PTR is likely to cause a major shift in development focus within the OMR market, from the Pre-Toll side to the Post-Toll side, thereby, disrupting the OMR’s linear growth pattern, the report said.

“The emergence of PTR as an alternate office corridor, is a welcome change in the Chennai realty landscape,” says Shaju Thomas, director – office services, Colliers International India. Development on the OMR has grown exponentially. However, end-users and tenants did not have equivalent comparable options and this was not due to what the corridor offered. The PTR will certainly compete with OMR and companies will have the opportunity to complement their existing operations, Thomas explains.

“With the PTR coming up in the south and Mount Poonamalle Road (MPR) picking up pace towards the west, the city would be well-poised to cater to varied demands of tenants. In the current scheme of things, there is a dearth of quality Grade-A office supply, but over the next 6-8 quarters, the trend will reverse and these corridors will see a glut in supply. The key to PTR evolving as a successful corridor in quick time, would be price points and positioning,” adds Thomas.

Sector-wise demand along the PTR and nearby areas

Colliers’ research on OMR micro-markets, suggests that the PTR, the link road between the parallel growth corridors of the GST Road and OMR, will be Chennai’s key new growth centre. Based on our analysis of sector concentration in various micro-markets, we advise large, established IT companies to choose the OMR Pre-Toll Road for future expansion, since proximity to the city centre is advantageous for talent acquisition and retention.

Occupiers such as automotive and manufacturing companies, requiring proximity to the airport and other transport links should choose the GST Road. However, the space is limited. The PTR should appeal to occupiers looking for large-scale relocation to attractive new SEZ developments, in a district offering ample supply of space and good infrastructure at modest rents.

Pricing and future prospects along the PTR

According to Colliers Research, the OMR Pre-Toll district has always been a more active market, in terms of office leasing in south Chennai, due to its proximity to the city centre and Grade A stock. “There has always been resistance among occupiers to move further down to the post-toll market, considering the infrastructure and absence of last mile connectivity.

However, the effective rents in the Pre-Toll market have more than doubled over the past ten years and we expect the rents to rise from the range of Rs 55-78 per sq ft per month in 2017 to Rs 65-85 per sq ft per month over the next three years. Therefore, strong demand and rising rents in the OMR Pre-Toll district, have started compelling companies to evaluate micro-markets beyond the Perungudi toll. The upcoming commercial real estate developments in Chennai are notably concentrated in the PTR with 6.65 million sq ft of office space scheduled for completion over the next three years,” says, Surabhi Arora, senior associate director, research, Colliers International India.

Chennai stood third in growth ranking and is forecasted to achieve 7.5 per cent average annual GDP growth over the period 2017 to 2021, according to Oxford Economics. The growth will be led by banking, trade, hospitality and manufacturing sectors. In addition, the major infrastructure initiatives planned along the corridor such as road widening, construction of grade separators, improvisation of storm water drains, etc., should largely eliminate the traffic congestion in the OMR district, divert smooth vehicular movement towards the PTR and have a positive impact on the developments coming up along the stretch. Although we are confident about the medium to long term potential of the corridor, any delay in infrastructure developments will slow down overall progress. 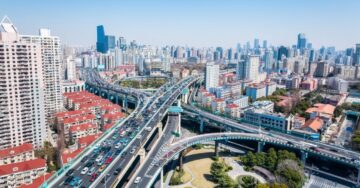 Pallavaram in Chennai: A good bet for residential real estate?. Ascendas-Singbridge to develop IT park on 12.20 acres, in Chennai’s Pallavaram-Thoraipakkam Road.

Why renting a house in Chennai, may be a better option than buying.