Despite a slew of measures to arrest the slump, by the government and the Reserve Bank of India (RBI) to boost liquidity and revive demand, a latest survey by Knight Frank, FICCI and NAREDCO, titled ‘Real Estate Sentiment Index Q3 2019’, shows that the current sentiments of the real estate stakeholders in India has plummeted further to 42 in the July-September quarter of 2019 (Q3 2019) from the preceding quarter – a level previously seen during the heightened uncertainty period of pre-election in the first quarter of 2014 and the demonetisation period (41) in the last quarter of 2016. The report further indicates that the future sentiment, or the outlook for the coming six months, has also turned ‘pessimistic’ for the first time since the inception of this survey, a clear indication that the sector is under immense pressure. However, sentiments toward the commercial real estate sector have remained steady, with the outlook for new office supply strong, for the coming six months. A score of over 50 signifies ‘optimism’ in sentiments, a score of 50 means the sentiment is ‘same’ or ‘neutral’, while a score of below 50 shows ‘pessimism’.

“The real estate stakeholders’ sentiment has gone in the ‘pessimistic’ zone for the current quarter, owing to poor demand-side performance, despite a plethora of measures by the government. However, it is more significant to note that, for the first time, the stakeholders are wary about the future six months for the real estate sector and the overall economy, thus, pushing the sentiment score in the red. While measures have been announced by the finance minister in this quarter, attempting to sort out the supply-side challenges, however, these measures are mostly focused on the affordable housing segment, leaving out the vast majority of ‘non-affordable’ housing from the announced benefits. These measures have not helped infuse confidence in the stakeholders, as the real challenge lies on the demand side, where end-users are unwilling to make home purchases owing to lack of financial confidence. The supply-side sops will not be enough, till the time demand is revived by putting money in the hands of the consumer and his confidence is restored,” said Shishir Baijal, chairman and managing director of Knight Frank India.

The future sentiment score for the real estate sector’s performance in the north, continues to be in the pessimistic zone (48) for the second consecutive quarter in 2019, though marginally improving from the preceding quarter of Q2 2019.

This north zone’s crisis has rubbed off on the west zone, with its sentiment score going in the ‘red’ for the first time. The future sentiment score in the west has been on a constant decline since Q4 2018 (62) and is at the lowest (45) in the Narendra Modi government regime. Real estate developers are pessimistic regarding the revival of the sector in the coming six months, with the future sentiment index score going in the red in Q3 2019 at 47 points, an eight-quarter low, due to the liquidity crunch, high borrowing cost and inventory overhang.

The future sentiment score of 51 of the financial institutions, is also the lowest since the Modi government came to power. The liquidity crunch, brought about by defaults of the IL&FS Group, have cautioned the lenders against their exposure to the real estate sector. Plummeting to a 22-quarter low, the lenders are exercising caution for the coming six months.

Economic outlook and funding scenario: Synchronised slowdown in the economy and cautious funding on the cards The outlook for residential new launches, sales and price appreciation, have yet again taken a hit in Q3 2019, clearly stating that the slew of measures taken by the by the government have not infused any confidence in the stakeholders. 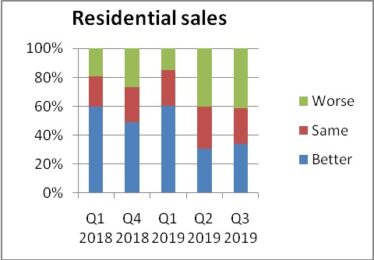 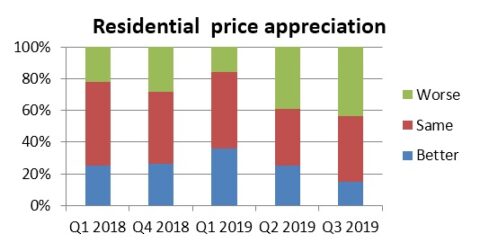 “We had several crises in the past, including the fiscal changes undertaken by the government. However, on the backdrop of credible real indicators, we anticipate a large increase in overall housing demand over the next 12 months. The biggest considerations are house prices and interest rates, which have significantly turned in favour of buyers. House prices for both, the under-construction, as well as the ready possession segment, are the lowest in the recent past. Similarly, home loan interest rates are at the lowest level ever, even as the RBI is working on better transmission of rate cuts. The unfolding of such an opportunity ensures that we are looking up to a much stronger market in times to come. From the supply side, with the short-term liquidity squeeze prevailing in the economy, even positive net worth companies across industries are turning into negative balance sheet. This is one important area that needs immediate attention. The current economic scenario makes it the right time for the RBI to announce its one-time rollover scheme, similar to what was rolled out during the Lehman crisis in 2009,” said Niranjan Hiranandani, national president of NAREDCO and founder and MD of Hiranandani Group. According to Sanjay Dutt, MD and CEO of Tata Realty & Infrastructure Ltd and chairman of FICCI real estate committee, it is time for a quantum leap, vis-à-vis policy planning and implementation.

“The government needs to ensure a stable, predictable and business-friendly environment that not just ensures economic growth but also leads to job creation and income stability. Further, moving beyond the accolades of signed MOUs, fast track efforts should be put in place, to ensure deployment of committed investments. Accelerated use of digitisation is one aspect that can meaningfully lift the current constraints and improve efficiencies. We should aim to build an India that stands for both, ‘ease of doing business’ and ‘sustain profitable growth’,” he concludes.

The increase in the exemption period on inventory tax announced in the budget and a rationalisation in GST rates, have contributed to improving stakeholders’ sentiments towards the housing market, according to Knight Frank’s Sentiment Index

May 14, 2019: The Indian real estate sector has expressed optimism in the first quarter of 2019, as per Knight Frank’s Q1 2019 Sentiment Index Survey. The Real Estate (Regulation and Development) Act, 2016 (RERA), exemption of inventory tax from one to two years in the union budget of 2019 and the Good and Services Tax (GST) rate rationalisation, have contributed to boosting the current stakeholder sentiments, the report said. The current sentiment score, developed jointly by Knight Frank India, FICCI and NAREDCO, has inched 5 points upwards from the preceding quarter and remains in the positive in the first quarter of the new calendar year. The market sentiments that had waned during 2017, with the various structural changes in the real estate sector, have bounced back and have been steadily improving since. Key findings of the Sentiment Index

Shishir Baijal, chairman and managing director, Knight Frank India said: “The Sentiment Index for residential has shown optimism, which can be easily interpreted to understand that development companies are looking towards a revival of the sector. This growth in demand is expected, despite the impending elections results, demonstrating confidence of the supply side that the structural changes introduced in the last few years, will start to show their results in the year forward.” 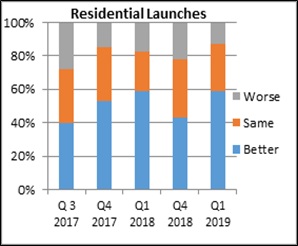 The future sentiment score for the north has regained optimism and is in the positive side in Q1 2019, after going in the red in the preceding quarter. The sentiment score of the developers for the coming six months, has significantly inched upwards in Q1 2019. Over the past quarter, the real estate sector has witnessed changes like the implementation of the new GST structure, exemption from paying notional rent and the incentivised push to affordable housing that have helped in positively impacting the market sentiments.

Coupled with this, the stakeholders see the reduced repo rates as a positive move by the banking regulator, which will provide the developers with the much-needed funds to execute their projects and also give a boost to sales, by attracting the fence-sitting buyers.

Sentiments of the financial institutions for the real estate scenario for the coming six months, have remained somewhat steady in Q1 2019 and are in line with the preceding quarters.

[fbcomments]
For any feedback, write to us at editor@housing.com.
https://seo.housing.com/api/v1/housing_news?tags=affordable%20housing,Demonetisation,FICCI,Good%20and%20Services%20Tax,Greater%20noida,GST,HFC,Knight%20Frank,NAREDCO,NBFC,NBFC%20crisis,Real%20Estate%20(Regulation%20and%20Development)%20Act,RERA,Sentiment%20index,Sentiment%20Index%20Survey