Home » Property Trends » The Delhi Metro Pink Line: Everything you need to know

With an intention to connect all Delhi Metro networks with each other, the Delhi Metro Rail Corporation (DMRC) planned the Pink Line corridor. The Pink Line is part of the Delhi Metro Phase III, which is currently operational in two parts – Majlis Park to Mayur Vihar Pocket I and the Trilokpuri to Shiv Vihar corridor. The missing link between Mayur Vihar and Trilokpuri is expected to get operational by June 2021, as per DMRC officials. Until now, the matter was sub-judice, due to land acquisition issues. Once operational, this will be the longest corridor of the Delhi Metro, forming a ring, with interchange facilities with all existing routes.

The Pink Line is almost 59 kms long and connects Majlis Park in north-west Delhi to Shiv Vihar in north-east Delhi, making it the longest line in the Delhi Metro. It also has the smallest metro station in the country at Ashram and the highest point in the Delhi Metro at Dhaula Kuan.

The Pink Line has 26 elevated and 12 underground stations, with the highest point being at Dhaula Kuan at 23.6 metres – as high as a seven-storey building.

A foot-overbridge (FOB) connecting the Durgabai Deshmukh South Campus Metro station of the Delhi Metro’s Pink Line and Dhaula Kuan Metro station of the Airport Express Line, was opened on February 9, 2019. The skywalk will make it much easier and quicker to reach Delhi Airport and the New Delhi Railway Station for residents of east, west and north Delhi.

Stations and interchanges on the Delhi Metro Pink Line 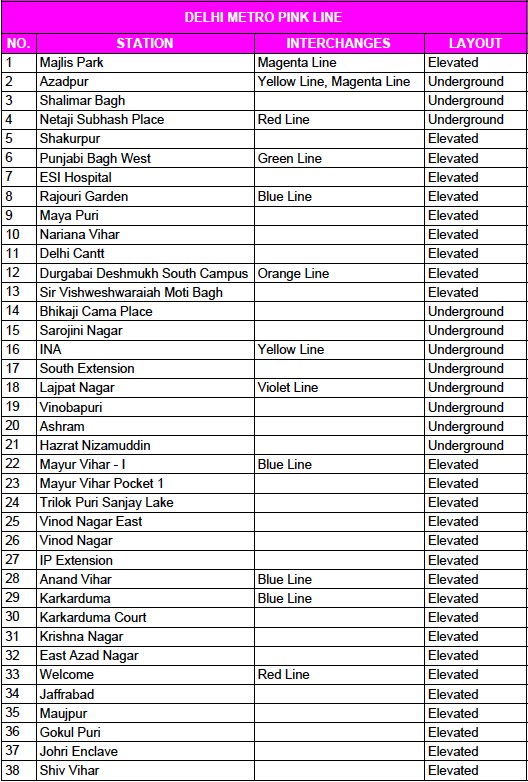 The Delhi Metro Pink Line was opened in four stages, from March to December 2018. The initial completion deadline of December 2016 could not be met, owing to land acquisition issues at certain stretches, after which the deadline was pushed to April 2018. The Pink Line was thereafter built in parts and finally completed in December 2018, with the inauguration of the Lajpat Nagar-Mayur Vihar Pocket I corridor.

The Pink Line was made operational in the following phases from March to December 2018:

After the 17.8-km Shiv Vihar-Trilokpuri Sanjay Lake section of the Pink Line was opened to the public on October 31, 2018, Delhi entered a select group of global cities such as London and Shanghai that have an operational metro network of over 300 kms. After the inauguration of the latest corridor in December 2018, the Delhi Metro network has expanded to nearly 327 kms, with 236 stations.

The section between Trilokpuri to Mayur Vihar Pocket I, is expected to be completed soon. The section was scheduled for inauguration in September 2020 but got delayed due to the Coronavirus pandemic. Now, the DMRC’s managing director, Mangu Singh, has said that the missing link will be operational in March 2021 and that trial runs on a 1.5-km stretch would start soon. The entire stretch where the work is currently underway, is 289 metres long and pillars to support the viaduct had come up in 2020. Once the viaduct is complete, the Pink Link will connect large parts of east Delhi with the south and west.

If the media reports are to believed, the missing link between Trilokpuri and Mayur Vihar Phase 1 will be completed and become operational starting June 2021. Also known as the ‘Ring Corridor’, the route will be the longest corridor on the Delhi Metro network. Earlier, the route was slated for completion in March but due to the COVID-19 pandemic, the construction could not be finished.

The Delhi Metro Pink Line’s expansion plan has received a boost, as the Japan International Cooperation Agency (JICA) and the government of India have signed development loans worth Rs 16,186 crores, for the Delhi Metro Pink Line under Delhi Metro Phase IV and three other major metro projects. Around Rs 8,390 crores will be utilised for  Phase-IV development of the Delhi Metro, which will include expansion of the Magenta Line from Janakpuri West to RK Ashram (28.92 kms) with 25 stations, the Silver Line from Aerocity to Tughlakabad (23.6 kms) with 15 stations and the Pink Line from Mukundpur to Maujpur (12.58 kms) with eight stations.

Meanwhile, the Delhi Metro Rail Corporation has said that the Pink Line will have driverless operations by mid-2021. The operations on the Magenta Line were recently made driverless.

Is the Pink Line working in Delhi Metro?

Yes, the Delhi Metro Pink Line is currently functional in two parts-Majlis Park to Mayur Vihar Pocket I and the Trilokpuri to Shiv Vihar corridor.

Yes, Hazrat Nizamuddin Metro Station is functional and is a part of the Delhi Metro Pink Line.

How far is metro station from Hazrat Nizamuddin?

Which metro station is near to Sarai Kale Khan?