Tughlaqabad Fort is a landmark in New Delhi that was built by Ghiyas-ud-din Tughlaq, founder of the noted Tughlaq Dynasty of the Delhi Sultanate, in 1321. He established the third city of Delhi that was once again abandoned in 1327. The fort gives its name to the nearby area of Tughlakabad, along with the Tughlaqabad Institutional Area. Tughlaq also constructed the Qutub-Badarpur Road which linked the new city to the Grand Trunk Road. The road is today called Mehrauli-Badarpur Road. The Fort lies near the Dr Karni Singh Shooting Range and also the famous Okhla Industrial Area. The Tughlaqabad Fort surrounds a vital biodiversity region within the Northern Aravalli leopard wildlife corridor linking to the Sariska Tiger Reserve. There are several historical places around this fort and sanctuary including the Anangpur Dam, Surajkund Reservoir, Adilabad ruins, Badkhal Lake and Damdama Lake, among other attractions. Tughlaqabad Fort, also called the Ruined Fort, is known to be synonymous with the power of the Tughlaq Dynasty. Ghiyas-ud-din reportedly dreamt of building this fort even before becoming Delhi’s ruler. It is one of the finest examples of Islamic architecture. There are 13 entry gates to this Fort and each one comes with awe-inspiring designs. Tughlaqabad Fort was tragically abandoned in a short span of time after being built. The Tughlaqabad Fort nearest metro station is Govindpuri, while the fort is just 20 kms away from Delhi Airport and 25 kms away from the Delhi Railway Station.

Ghazi Malik was a feudal lord for the Delhi-based Khilji rulers. Once, while taking a walk with his master, he proposed the development of a Fort upon a hillock in the southern part of Delhi. The king joked that Ghazi Malik would be required to build it himself, when he assumed the throne of Delhi. His words ironically rang true as Ghazi Malik drove the Khilji rulers away in 1321 and took the title of Ghiyas-ud-din Tughlaq, commencing his own Tughlaq Dynasty of rulers. He immediately started development of a city, which he had been dreaming of, including a beautiful fort for keeping invaders at bay. Legends state that Ghiyas-ud-din Tughlaq was hugely passionate about his new fort and he issued a dictum likewise stating that all Delhi laborers were to work only for the fort. Saint Nizamuddin Auliya, a well-known Sufi mystic, was angered since the work stopped on his well or Baoli. The saint apparently cursed that ‘Hunuz Dilli Door Ast’ or ‘Delhi is still far away’. The emperor was engaged in a military campaign during this period in Bengal. He succeeded and was returning to Delhi when Muhammad bin Tughlaq, his son, met him at Kara, Uttar Pradesh. At his orders, allegedly, a tent or ‘Shamiana’ was made to drop on the emperor who was fatally crushed under it in 1324.

See also: All about the Kanch Mahal: An exquisite architectural wonder of the Mughal period

The mausoleum of Ghiyas-ud-din Tughlaq is linked through a causeway to the southern outpost of the fort. The elevated causeway goes till 600 ft in length and is backed by 27 arches, leading through an artificial lake. After passing the ancient Peepal tree, the Ghiyas-ud-din Tughlaq tomb complex has a gateway crafted from red sandstone with a flight of steps leading to it. The mausoleum is made of a single domed tomb in a square shape with parapets and sloping walls. The sides have smooth red-coloured sandstone and are inlaid with inscribed panels and marble arch borders. The edifice has an elegantly shaped dome on an octagonal drum covered by white marble and slate slabs. Within the mausoleum, you will find three graves, namely a central one belonging to the emperor himself and two others, believed to be for his son Muhammad bin Tughlaq and wife. There is another octagonal tomb in a similar design with a smaller marble dome and inscribed sandstone and marble slabs over the arched doors. As per the inscription, this tomb has the mortal remains of Zafar Khan. 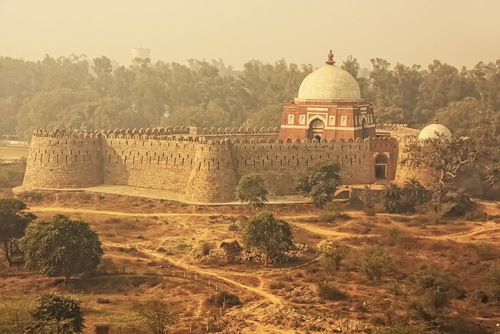 Tughlaqabad still comprises several appealing and huge stone-made fortifications which surround the irregular city ground plan. The rubble-filled and sloping city walls make for a regular feature for monuments dating back to the Tughlaq Dynasty. They are roughly between 10-15 metres in terms of height, topped off by imposing battlements, parapets and circular bastions, which go up to two storeys in height. The city once reportedly contained 52 gates and only 13 are existent in contemporary times. There were seven rainwater tanks in the fortified city of the past, as per reports. 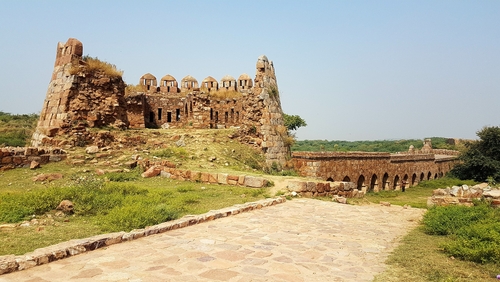 Tughlaqabad Fort has three portions, namely its wider city zone, with houses developed along the rectangular grid between the gates and the citadel with the tower at the highest point called Bijai-Mandal. There are remnants of multiple halls and a lengthy underground passage, as well. In the adjacent palace zone, there are residences for the royal family, with an underground passage still existent beneath the tower. A large part of the city cannot be accessed in recent times owing to the dense vegetation surrounding it. The major part is occupied by numerous settlements, particularly towards the lakes. To the south of the city was a huge artificial water reservoir within the fortified Ghiyath al-Din Tughlaq Tomb. The mausoleum stays linked to the fort via the elevated causeway. The fortress of Adilabad’s remains may be viewed towards the south-eastern corner and this was built several years later by Muhammad bin Tughlaq. Where is the Tughlaqabad Fort located?

The Tughlaqabad Fort is located in Delhi, only 25 kms away from the Delhi Railway Station.

The Tughlaqabad Fort was built by Ghiyas-ud-din Tughlaq, the founder of the Tughlaq Dynasty.

Which famous Sufi Saint is tied to legends surrounding the Fort?

The Tughlaqabad Fort is inextricably tied to legends revolving around Sufi Saint Nizamuddin Auliya who apparently cursed the emperor and the fort’s construction. 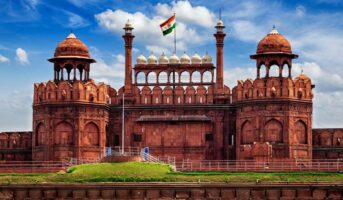 All about the Delhi Red Fort or Lal Kila. 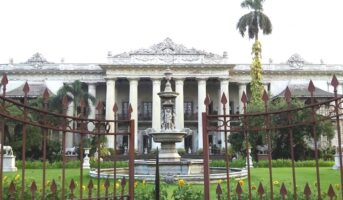 Marble Palace Kolkata: A residence built with 126 types of marbles. 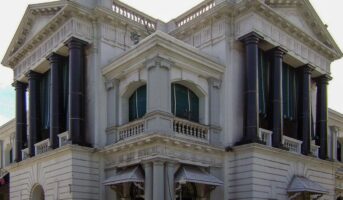