L&T Metro Rail Hyderabad (LTMRHL), on November 20, 2017, said that the Commissioner of Metro Rail Safety (CMRS) Ram Kripal and a team from the Railway Safety Commission, inspected a range of works and systems on the Hyderabad Metro, for three days from, November 17, 2017. These included the civil works, track, RoB, viaduct, stations, electrical, telecommunication, signalling and train control, rolling stock and other railway systems. They also conducted speed trials.

“After checking various systems, the CMRS has issued authorisation for the opening of the Mettuguda to SR Nagar stretch via Ameerpet Interchange Metro Station (a 30-km stretch),” it said in a statement. LTMRHL managing director and CEO Shivanand Nimbargi said, “This authorisation will enable us to operate the metro trains from Nagole to Miyapur via Ameerpet Interchange Metro Station seamlessly. The CMRS approval for commissioning of Stage 1 (Nagole to Mettuguda) and Stage 2 (Miyapur to SR Nagar), have already been received.”

The metro rail, which will be elevated, has a total length of 72 kms. Telangana chief minister K Chandrasekhar Rao, has invited prime minister Narendra Modi to inaugurate the 30-km-long first phase of the metro project, when the latter is in the city to attend the Global Entrepreneurship Summit, to be held from November 28-30, 2017.

The project, which started in July 2012, was initially scheduled to be completed by June 2017 (in all three corridors) but land acquisition and other issues resulted in the project overshooting the deadline. Minor pending works would be completed shortly, after which the complete stretch, from Nagole to Miyapur via Ameerpet Interchange Metro Station, would be ready for operation, the statement added. 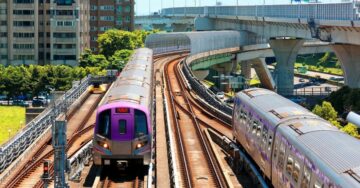