Home » Must Knows » Legal » Buying adjacent apartments to use as one: The pros and cons

Rai Singh, a resident of north-west Delhi, recently shifted to south Delhi’s upmarket Vasant Vihar, after selling his duplex unit. In Vasant Vihar, he bought two small one-bedroom units that were adjacent to each other. Although he received a handsome amount from the sale of his property in north-west Delhi, he had to spend an extra amount to purchase the units in south Delhi, owing to the higher capital values in this region. His plan was simple – to combine the two adjacent flats, to make a bigger apartment.

However, Singh’s task was not as easy as he initially thought it would be. There were a number of factors that he did not account for, while buying the two units. Here is a look at some of the benefits and challenges of such a purchase and the costs involved.

The advantages of buying adjacent flats

For Singh, the overall cost of buying two adjacent flats, was slightly lesser in comparison to buying a bigger apartment. “While a two-bedroom apartment generally costs Rs 90 lakhs to Rs 1.5 crores in Vasant Vihar, smaller one-bedroom units cost Rs 60-65 lakhs. Thus, combining two smaller apartments might cost you lesser,” says Manish Gupta, a south Delhi-based broker. Depending on the location, the area may vary, he adds.

Most states in the country prohibit the merging of two adjacent flats, to make a bigger apartment. Some that allow such modifications, ask the owner to obtain necessary permits, for such a change. In Singh’s case, the two units were part of the Delhi Development Authority’s area and it became quite an ordeal for him to combine the two units. “The units were adjacent and had similar layouts. However, I needed permissions from the local municipal authority to change the layout of the units and combine the two, which, otherwise, is not allowed in authorised areas. Then, I also needed the permissions from the colony’s residents’ welfare association. Moreover, I needed to placate my new neighbours, who were not very pleased with the construction work that I took up, after getting all the necessary permissions,” he recalls.

Cost and time for permissions: The two units that Singh bought, were on the same plot of a single owner and had a sanctioned plan. Yet, Rai had to wait for almost six months, to get all the permissions. The time consumed in such a work, for hiring an authorised architect of the authority and to obtain all the sanctions for amendments, was significant. Moreover, going through the bureaucracy for other kinds of sanctions, such as police, fire department, etc., might be tough in some places.

Cost of amendments: Additionally, there are costs that will be incurred for the paperwork. Once the approvals are obtained, one may also have to incur costs for making the modifications, which may go up to a few lakhs.

Should buyers opt for adjacent apartments?

Any buyer, who intends to buy two adjacent units in an authorised colony or group housing, will have ownership of two different units. “You will have the ownership of two units instead of one. Hence, the taxes are also applicable accordingly,” points out Delhi-based lawyer, Ekank Mehra. Thus, if you wish to have two units that you can later combine, you must first get a hold of such units, where there is a common wall between of the two units, where you can build smooth connectivity. In case you find such units, there may be a chance that you may not get the intended floor.

“Moreover, if the two units are available in resale, there could be a price difference on each unit, owing to differences in the additional charges, date of delivery and the preferential location charges applicable on the said units,” adds Gupta. Also, it is advisable to read the bylaws of the state and the authority, before you embark on a decision.

How to calculate the holding period for an under-construction property. 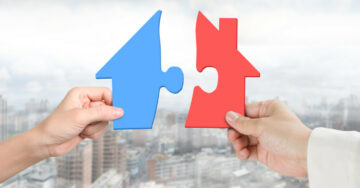