The Madras High Court, on July 12, 2019, dismissed a petition filed by the Tamil Nadu government, challenging the Rs 100-crore penalty imposed on the state by the National Green Tribunal (NGT), for not cleaning the Buckingham Canal, Adyar and Cooum rivers. A division bench of justices R Subbaiah and C Saravanan, held the petition as not maintainable, saying that as per Section 22 of the NGT Act, an appeal against any order of the tribunal can be made only in the Supreme Court.

The high court had, on April 9, 2019, granted an interim stay on the Rs 100-crore penalty imposed by the NGT-south zone for the government’s failure to restore the Adyar and Cooum rivers and the Buckingham Canal, in Chennai. Directing the government to pay the penalty to the Central Pollution Control Board (CPCB), the NGT, in its February 13, 2019 order, had said the money shall be utilised to restore the water bodies.

The Madras HC has ordered an interim stay on a penalty of Rs 100 crores that was imposed by the NGT on the state government, for its failure to restore the rivers in the city

April 10, 2019: The Madras High Court, on April 9, 2019, granted an interim stay on the Rs 100-crore penalty imposed by the National Green Tribunal (NGT), south zone, on the Tamil Nadu government for its failure to restore the Adyar and Cooum rivers and the Buckingham canal. A division bench comprising justice R Subbiah and justice Krishnan Ramasamy, was hearing a petition of the government against the NGT order dated February 13, 2019.

The government submitted that despite details handed over to the Tribunal over the restoration of the waterways, it had passed the order directing payment of Rs 100 crores. The order lacks non-application of mind and was based on mistake of facts and contrary to the principles of natural justice and was arbitrary and unreasonable, the government said.

The NGT had passed the order on a batch of pleas, including one moved by social activist Jawahar Shanmugam, seeking a direction to the state to restore and revive the water bodies. Directing the government to pay the penalty to the Central Pollution Control Board (CPCB), the Tribunal said the money shall be utilised to restore the water bodies. Adyar and Cooum are two of the most polluted rivers to flow through any major urban agglomeration anywhere in the world and the Tamil Nadu government is accountable for the situation, the Tribunal had observed in its order.

The Madras HC has stayed a Rs two-crore penalty imposed by the National Green Tribunal on the Tamil Nadu government, over its delay in removal of the encroachments along and prevention of pollution of Adyar and Cooum rivers in Chennai

On October 31, 2018, the NGT imposed the fine, noting that the pace of work undertaken by the PWD to resolve these issues, was disappointing. The order was passed on a plea by activist Jawaharlal Shanmugam, seeking restoration of rivers and canals in the city. Directing the Tamil Nadu chief secretary to look into the matter directly and ensure that steps are taken on an urgent basis, in the interest of the environment and the people, the tribunal said the report on removal of encroachments was equally disappointing.

It is stated that out of total 26,300 encroachments, only 408 have been evicted, leaving the balance of 25,892 encroachments still to be dealt with. Imposing the penalty, the NGT also warned the department that if it failed to comply with the directions a fine of Rs 50,000 per day would be imposed on it. 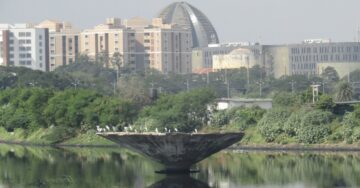 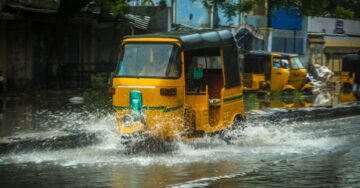