In a week’s time, some clarity may emerge as the environment ministry, on December 28, 2017, gave about seven days to various agencies, to respond whether deadlines listed in a mega plan to clean Delhi’s air, by a Supreme Court-monitored panel, suit them or not. The EPCA has set the deadline concerning the bus fleet among several other recommendations, in the ‘Comprehensive Action Plan for Air Pollution’, which was submitted in the apex court in November 2017. Consequently, Delhiites will soon know whether the city will have at least 10,000 buses, up from the existing fleet of nearly 5,000, by December 2018.

According to the plan, the city’s transport department and the Delhi Development Authority (DDA) are the agencies responsible, when it comes to augmenting the bus fleet. Apart from the segment on buses, the plan focuses on 13 key pollution sources, as identified by an IIT-Kanpur study and lists a series of short, medium and long-term measures, unlike the Graded Response Action Plan (GRAP) which focuses on tackling only emergency levels of pollution. It has set February 2018, as the deadline for implementation of a parking policy in the city and tasked the municipal agencies, traffic police and the transport department with implementing it. Among other measures, it says, that the NTPC and the power-grid corporation have to ensure that the coal-based Badarpur thermal power plant shuts permanently, by mid-2018.

“The plan is final. It will not be reopened. The meeting was fruitful and we are hoping the ministry notifies it soon,” EPCA (Environment Pollution – Prevention and Control Authority) member, Sunita Narain said. Another official, who was present in the meeting in the ministry, said on condition of anonymity that the environment secretary told the agencies to suggest minor changes in deadlines, if they wish to, within a week.

The EPCA had earlier submitted the report in March 2017. Subsequently, the SC had asked it to resubmit it, after including clear timelines for implementation of the proposed measures. “The Delhi government must ensure total compliance with the orders of 1998 and 2016, by December 2018. This requires a total fleet of at least 10,000 buses,” the report said. The AAP government recently initiated the process to procure 2,000 CNG buses (1,000 for DTC and 1,000 for the cluster scheme) by 2018. New buses have not been added to the fleet of the Delhi Transport Corporation (DTC) since 2010. Currently, the DTC has a fleet of 3,944 buses, while the Delhi Integrated Multimodal Transit System (DIMTS) runs 1,634 buses under the cluster scheme, as per the transport department’s statistics. 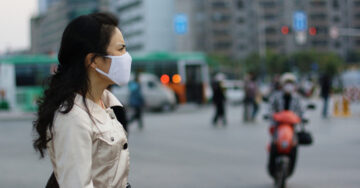 Delhi air pollution: Emergency plan to kick in from October 15, 2018.