Bandra, commonly known as the ‘queen of the suburbs’ is one of the most premium and expensive residential localities in Mumbai. With respect to affluence, Bandra east was always looked down upon, as the residents were mostly middle or lower class, whereas Bandra west had houses of the rich and influential cricketers, movie actors, as well as politicians. However, the scenario is rapidly changing as Bandra east is slowly catching up. The primary reason being availability of space for new residential project developments. Secondly, the conceptualisation of the central commercial hub of BKC, has given a major boost to the Bandra east real estate market. There are several builders in Bandra east including Happy Home, Rustomjee, RNA Corp, Dheeraj Realty and Kanakia Spaces, who have launched several mid-range, luxury and ultra-luxury projects. Almost 40% of flats in Bandra east that are on sale are new constructions. Independent houses in Bandra east, along with 2 and 3-BHK apartments are readily available. Nearby Bandra east localities include Bandra west, Kurla, Dharavi, Khar, Matunga, Dadar west, Mahim, Santacruz east and Santacruz west.

Connectivity with nearby Bandra east localities

Schools in Bandra east and other social amenities

Bandra east is very well-planned and offers good civic amenities, with wide internal roads, tree-lined avenues and several well-maintained parks and gardens. People prefer to buy apartments in Bandra east due to the peaceful nature of the locality. Bandra east has the MMRDA grounds, where iconic bands like Iron Maiden and musician Mark Knopfler had performed. Top apartments in Bandra east which are under-construction include Kanakia Paris, Rustomjee Seasons and Happy Home Jade Gardens.

Reasons to invest in Bandra east

The price trends in Bandra east indicate that there will definitely be an increase in the real estate values, since Bandra west has hit a saturation level in terms of residential properties. Apart from a strong social and civic infrastructure, the property prices are low and affordable in comparison to Bandra west. Due to its connectivity with other suburbs and proximity with the commercial hub of BKC, it has turned into a preferred location for buyers. However, before investing in this locality, one should keep in mind that one of the bordering localities is Dharavi, which is dominated by slums and unorganised developments, which might lead to security issues. Otherwise, it is definitely a good idea to invest in Bandra east real estate, keeping the price appreciation and future prospects in mind. 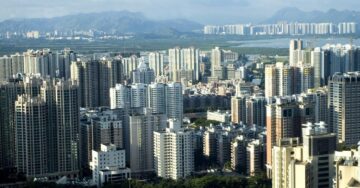