The Bangalore Metropolitan Region Development Authority (BMRDA) is an autonomous body, created by the Karnataka government under the BMRDA Act, 1985. The body was created to plan, coordinate and supervise the orderly development of the areas within the metropolitan region of Bengaluru. From time to time, the BMRDA conducts surveys, as well. The reports thus created, are used to prepare plans for the city. In this article, we examine the power and functions of the BMRDA. 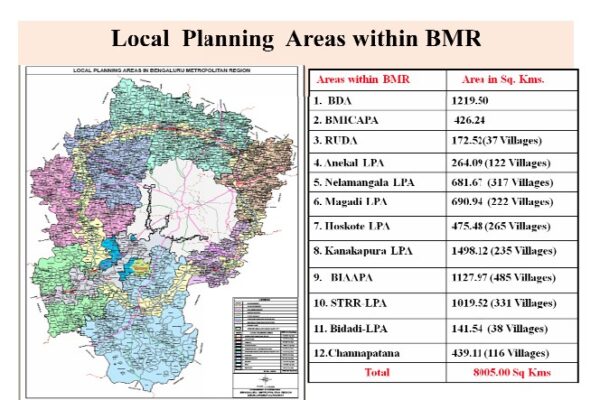 As already mentioned, the BMRDA prepares reports based on the surveys they conduct.

For the development of the Bangalore Metropolitan Region (BMR), a structured plan is necessary and the BMRDA sees to it that it is ready. The Authority also oversees that developmental works are carried out, as laid out in the structure plan.

See also: All about government land rates in Bangalore

The BMRDA is also responsible for the formulation of as many schemes as are necessary, to execute the structure plan.

See also: Everything about Mumbai Metro

Every scheme and project requires finance and the BMRDA must raise it and thereby, assist the local authorities towards the execution of various projects in the metropolitan region. The government may also entrust the Authority with other responsibilities from time to time.

Projects on unapproved layouts are not unheard of. Instances of developer firms coming up with properties, without obtaining the required permissions, have been very common and as a home buyer, this is something to be cautious about. The project you are investing in must receive the necessary approvals from the concerned authorities and this is possible, only if all the legal requirements are fulfilled as mentioned in the Land Revenue Act, the Land Reforms Act, The Town and Country Planning Act and the BMRDA Act. If you invest in an unapproved layout, chances are these would lack basic amenities and would not abide by the rules of town planning. Additionally, you may be unable to sell it in future too.

The BMRDA is responsible for approving building layout plans in areas falling under their jurisdiction. To obtain BMRDA building plan site approval, you submit an application to the local BMRDA office. Provide relevant documents that include building plan, title deed, sanction plan, and encumbrance certificate.

As already mentioned, contravening the provisions and rules laid down by the BMRDA invites penalty. This could be:

If the person committing an offence under this Act is a company, every person who, at the time the offence was committed, was in charge of and responsible to the company for the conduct of its business, as well as the company, can be held guilty.

Check out properties for sale in Bengaluru

What is a BMRDA structure plan?

The BMRDA structure plan is a regional-level perspective plan, supporting a long-term vision for the integrated development in the Bengaluru area, without compromising on its ecology and natural environment.

What is the difference between BMRDA and BDA?

The BMRDA is responsible for bringing about changes in urban development policies, while the Bangalore Development Authority (BDA) is in charge of planning in the city.

[fbcomments]
For any feedback, write to us at editor@housing.com.
https://seo.housing.com/api/v1/housing_news?tags=bangalore,Bangalore%20Metropolitan%20Region%20Development%20Authority,Bengaluru,BMRDA,bmrda%20approval,bmrda%20full%20form