In order to strengthen its commitment of keeping ‘citizens first’ and to bring about Bengaluru’s organised growth, the Karnataka government set up the Bangalore Metropolitan Task Force (BMTF) in 1996. The BMTF is headed by the additional director-general of police and has supporting staff from sections including administrative and revenue section, police and the town planning section.

In sync with the needs of citizens and the various stakeholders, the BMTF works towards driving economic activity in the city by making it a preferred choice for people to live and work. The key responsibilities of the BMTF include:

See also: All you need to know about the Bangalore Metropolitan Region Development Authority (BMRDA) The BMTF has outlined a strategy, based on which they plan to operate, in order to make Bengaluru a sought-after place for living and working. It is focusing on developing an open way of communication with the citizens and addressing the issues of the affected parties. They also are developing an intelligence network to obstruct and fish out violations in organisations in their jurisdictions. Finally, among other strategies, they are also working on sensitising employees of organisations in corruption-free methods of working. 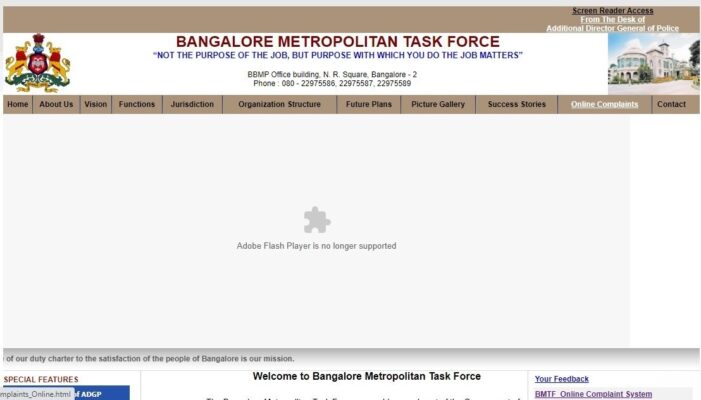 You will find the online complaint form which has to be filled and submitted. In the form, mention details including name, address, phone number, email id, complaint subject details and address of the property. The complaint gets registered once you fill the form and the recipient will be sent a ticket number immediately.

See also: Bangalore master plan: Everything you need to know

To check the status of the complaint, a citizen has to log on to the website http://bmtf.gov.in/ and click on the ‘online complaints’ tab present on the homepage and click on ‘know your status’. Users who have selected their identities to be confidential can view their status by putting their user id and password.

The Bangalore Metropolitan Task Force is headed by the additional director- general of Police.

When was the Bangalore Metropolitan Task Force set up?

The Bangalore Metropolitan Task Force was set up in 1996.

[fbcomments]
For any feedback, write to us at editor@housing.com.
https://seo.housing.com/api/v1/housing_news?tags=bangalore,Bangalore%20Metropolitan%20Task%20Force,BBMP,Bengaluru,BMTF,Bruhat%20Bengaluru%20Mahanagara%20Palike