The Real Estate (Regulation and Development) Act, 2016, is a landmark legislation in the history of Indian real estate. It is a comprehensive statute that establishes the Real Estate Regulatory Authority, to regulate the relationship between developers and home buyers. Tasked with enforcing the provisions of the Act, the Authority ensures that developers execute registered sale agreements with home buyers, construct according to approved plans and deliver time-bound possession of the apartments.

The problem of forced consent

While proponents of the RERA are upbeat about its positive prospects for the industry, home buyers have a slightly different tale to tell. Recently, an aspiring home buyer, Rohan (name changed to maintain confidentiality), booked an apartment in an upcoming RERA-registered housing project in Lucknow in Uttar Pradesh, being constructed by a branded developer. Confident that the builder would strictly comply with the RERA, Rohan made a 10 per cent down payment and proceeded to register the agreement for sale along with the developer.

Having registered the agreement at the office of the sub-registrar, Rohan was in for a minor shock, when, at the last minute, the developer asked him to sign a letter titled ‘Unconditional and irrevocable consent to make alterations in project plans’. By making him sign the letter, the developer wanted Rohan to consent to any future changes he would make in the sanctioned building plans. Such a consent would be unconditional, irrevocable and tendered in advance, leaving the developer free to make any changes, as per his whims and fancies. Sensing a malicious intent on the part of the developer, Rohan refused to sign the document, citing Section 14 of the RERA.

RERA Section 14: No amendment in plans without buyer’s consent

Section 14 of the RERA prohibits developers from making any amendments to the sanctioned plan of the project, without the prior consent of the home buyers. As per Section 14, any alteration in the plans and specifications of an individual apartment, is permitted only with the prior written consent of the concerned home buyer. On the other hand, alterations in the layout of the entire project and the common areas of the building, cannot be effected unless the developer obtains the prior written consent of two-thirds of all the home buyers (or allottees) in the project. Thus, the developer is duly bound to adhere to the approved plans during the construction and cannot deviate from the same.

The doctrine of ‘Informed consent’

The phrase ‘prior written consent’ in Section 14, is of pivotal importance, as it implies that home buyers must be informed of the proposed changes in the project, before they give their consent. The Bombay High Court, in the case of Madhuvihar Cooperative Housing Society and others vs Jayantilal Investments and others, 2010 (6) Bom CR 517, had the opportunity to interpret Section 7 of the Maharashtra Ownership of Flats Act (MOFA), 1963, which is similar to Section 14 of the RERA. It held that the consent of a home buyer must be an ‘informed consent’, i.e., one which is freely given after the flat purchaser is placed on notice by complete and full disclosure of the project or scheme that the builder plans to implement. Further, the consent must be specific and relatable to a particular project or scheme of the developer which is intended.

The bench further added that blanket or general consents, obtained in advance by developers, particularly during signing of agreements, were legally invalid. Such vague consents defeated the very purpose, for which the Maharashtra Ownership of Flats Act was enacted. The court, thus, gave a purposive interpretation to the statute and held that malpractices by developers, could not be permitted to defeat the very purpose for which the Act was passed.

As the Bombay High Court is a court of record under Article 215 of the constitution of India, the law declared by it will be binding in the state of Maharashtra and serve as a strong precedent for other high courts.

As Section 7 of the MOFA is analogous to Section 14 of the RERA, the ruling of the Madhuvihar Cooperative Housing Society case will hold good for all cases that come before the Real Estate Regulatory Authority and the Real Estate Appellate Tribunal. Therefore, should a developer desire to amend the project layout, he must obtain the prior written consent of all the allottees. Such a consent should be obtained, after informing them about all the proposed modifications and amendments and the impact it will have on the developer. This will enable the allottees to take an informed decision, keeping in mind their interests.

Forced consents can be set aside

It is important to note that in Rohan’s case, had the developer forced him to give his consent by hook or crook, it could be held as void under Section 19 of the Indian Contract Act, 1872. Section 19 declares that any consent, obtained by means of fraud, coercion, misrepresentation or undue influence, can be voidable at the instance of the aggrieved person. Therefore, if a home buyer has given consent under pressure from a developer, he can easily challenge the same and get it declared null and void under Section 19 of the Indian Contract Act, 1872.

Filing a complaint with the Real Estate Regulatory Authority

The ideal remedy for home buyers facing pressure from developers to sign such unconscionable letters, would be to file a complaint under Section 31 of the RERA. Once the complaint is filed, the Regulatory Authority can invoke its powers of investigation enshrined under Section 35 of the Act and investigate the matter. If the Authority finds that the developer is violating the letter and spirit of Section 14, it can impose a penalty amounting to five per cent of the cost of the project. Further, if it finds that the developer is indulging in fraudulent practices, it can even cancel the registration of the project under Section 7 of the Act.

It is a time-honoured principle that a law is toothless, without enforcement. With the passage of the RERA, the key to enforcement now lies in the hands of home buyers themselves. Should a person confront any oblique malpractices being committed by a RERA-registered developer, he must immediately file a complaint under Section 31 of the RERA and ask the Authority to investigate the matter and penalise the developer accordingly. As proceedings under the RERA are relatively quick and unfettered by the adjournment culture prevalent in the civil courts, home buyers have reason to believe that justice would be done in their matters. Prompt action in any situation, will not only serve as a deterrent but also foster consumer awareness and resolve. 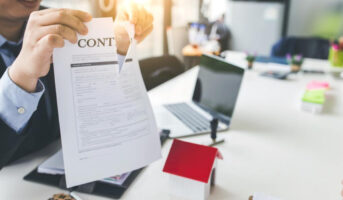 Does the RERA allow buyers to cancel an allotment at any time?. 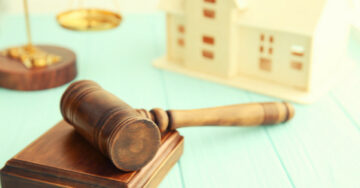 [fbcomments]
For any feedback, write to us at editor@housing.com.
https://seo.housing.com/api/v1/housing_news?tags=Agreement%20Project%20plan,bombay%20high%20court,building%20plan,Forced%20consent,Indian%20Contract%20Act,Maharashtra%20Ownership%20of%20Flats%20Act,Real%20Estate%20(Regulation%20and%20Development)%20Act,Real%20Estate%20Regulatory%20Authority,RERA,Sale%20agreement,Section%2014,Section%207