One of the most luxurious lifestyle projects in Mumbai’s suburbs, Empire Centrum has announced attractive booking discounts for all its home buyers. The offer was revealed during a live webinar with Housing.com, on August 28, 2020. (Watch the webinar on our Facebook page here). Empire Industrial Centrum (EIC) is a 35-acre township located near the Badlapur-Kalyan Corridor, offering residential, commercial and industrial spaces for investment. Out of this, around five acres has been earmarked for residential development, two acres for commercial and 28 acres for industrial development. The township is being developed by Empire Industries, one of the oldest conglomerates in India with a legacy of 116 years in various sectors.

Home buyers should note that all these offers are applicable only till August 29, 2020.

Empire Group has also announced a special pricing for home buyers, who intend to pay the booking amount before the last date:

Home buyers can opt for 1BHK-Jodi and 2BHK-Jodi units, as well.

While talking about the connectivity, the Empire Group announced that the Chikhloli railway station has been finally approved by the Mumbai Railway Vikas Corporation under the Mumbai Urban Transport Project-3A. The total cost of this project is expected to be Rs 14,000 crores. The new railway station will be at a walking distance from the project and will connect the location to other important hubs of the Mumbai Metropolitan Region (MMR).

Apart from this, the panelist representing the Empire Group, also revealed that this was the first project in Maharashtra to get approved under the ‘walk-to-work’ concept. While discussing the commercial and industrial aspect of the project, one of the panelists, Jasmeet Singh, head – sales, CRM and marketing at Empire Centrum, said that no red-zone industry would be allowed in the township and only non-polluting industries would be welcomed. He further added that a nearly 3.5-acre garden had been designed near the residential area, to ensure maximum greenery and fresh air for the residents.

The EIC team shared details about the amenities available in the project, which include an infinity swimming pool facing the Sahyadri Hills, a rooftop clubhouse and a beautiful landscaped garden. Along with this, the project includes a skating rink, tennis and volleyball courts, gaming zone for kids, as well as adults, business centre for meetings, movie lounge for family parties and three jogging tracks inside the campus.

It should be noted that the Phase I of this project is 95% sold out, with the occupancy certificate already received for two towers. Phase II is 80% sold out and will be delivered in December 2021, while Phase III is newly-launched and scheduled for delivery in September 2025. 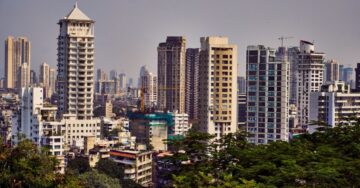