The safety certificate for the 11-km stretch between Jubilee Bus Station and Mahatma Gandhi Bus Station, on corridor-II of the elevated Hyderabad Metro Rail project has been issued, officials said on January 12, 2020. The government will decide the date of inauguration of the route soon, Hyderabad Metro Rail Limited (HMRL) managing director NVS Reddy said, according to an official release. The certificate was issued by Commissioner of Metro Rail Safety (CMRS) Janak Kumar Garg, who inspected the corridor along with Reddy, L&T Metro Rail (Hyderabad) Limited managing director KVB Reddy and other senior officials. It has cleared the way for the introduction of passenger services on the last corridor of Hyderabad Metro rail project phase-I, the release said. The corridor has nine stations, it added.

HMRL officials had earlier said that it would take 16 minutes to cover the stretch between JBS to MGBS on the metro, as against 45 minutes by road. The trial runs on the route had commenced on November 25, 2019.

The 1.5-km stretch of the Hyderabad Metro, between Hitec City and Raidurg, will be opened to commuters on November 29, 2019

November 29, 2019: The 1.5-km stretch of the metro rail between Hitec City station and Raidurg, would be inaugurated on November 29, 2019, Hyderabad Metro Rail Limited (HMRL) has announced. The Commissioner of Metro Rail Safety (CMRS) Janak Kumar Garg inspected the section and conducted the mandatory check and safety tests over the last two days and issued a safety certificate, for opening of the stretch, HMRL managing director NVS Reddy said, on November 28, 2019.

Telangana’s municipal administration minister KT Rama Rao and transport minister P Ajay Kumar would flag off the train at Hitec City station and travel by train to Raidurg, he said. Regular passenger service would start a few hours later, he said. The opening of stretch would provide a major relief to a large number of employees working in the IT/ITES and other establishments and an initial additional ridership of about 40,000 is likely, Reddy added.

The 11-km stretch between Jubilee Bus Station and Mahatma Gandhi Bus Station has nine stations and would take 16 minutes to cover this corridor, as against 45 minutes by road November 26, 2019: Hyderabad Metro Rail Limited (HMRL) on November 25, 2019 announced that trial runs have commenced on the 11 km Jubilee Bus Station-Mahatma Gandhi Bus Station stretch. A team of technical experts and engineers, led by HMRL Managing Director N V S Reddy and L&T MRHL Managing Director K V B Reddy, traveled by Metro train on the corridor and observed various technical and safety parameters and performance of the train during the trial run.

The 11 km corridor has nine stations and it would take 16 minutes to cover this corridor from JBS to MGBS, as against 45 minutes by road, the HRML MD said. A large number of technical specifications, performance criteria and safety standards pertaining to signalling and safe train separation would be tested during the trial runs in the next few weeks. The data and other inputs from these tests would be sent online to M/s Thales in Canada, which is supplying Communication Based Train Control technology,N V S Reddy said.

The signalling and train control software will be fine-tuned based on these inputs for the safe operation of Metro trains in automatic mode with CBTC technology, he said. The Commissioner of Metro Rail Safety would give the final safety clearance of the corridor after receiving the performance and safety certification from Thales, the Internal Safety Assessor, Halcrow, and other related Indian and international organisations, following which the stretch would be thrown open for passenger operations, he said. Prime Minister Narendra Modi had inaugurated the 30 km stretch (between Miyapur and Nagole) out of the 72 km long elevated Hyderabad Metro Rail project, in November 2017. In September 2018, another 16-km stretch of Hyderabad Metro between Ameerpet to L B Nagar was commissioned. On March 20, 2019, a 10-km stretch of Hyderabad Metro Rail between Ameerpet and Hi-Tec City was inaugurated, covering 56 km out of the 72 km project. The concessionaire L&T Metro Rail (Hyderabad) Limited is building the Hyderabad Metro Rail project across three corridors.

See also: Hyderabad: The most affordable metro in the country

The entire Corridor-I of the Hyderabad Metro Rail became operational on September 24, 2018, with the inauguration of a 16-km stretch between Ameerpet and LB Nagar

September 24, 2018: A 16-km stretch of the Hyderabad Metro Rail, between Ameerpet and LB Nagar, was inaugurated on September 24, 2018, by the governor of Andhra Pradesh and Telangana, ESL Narasimhan, making the entire Corridor-I phase operational. With the inauguration of this route having 16 stations, the entire 29 kms of Corridor-I, from Miyapur to LB Nagar, is now open for passenger operations.

Corridor-I (Miyapur-LB Nagar: 29 kms, 27 stations) is one of the most congested traffic corridors of Hyderabad. With 46 kms now operational, it is India’s second-largest metro rail network, next only to Delhi. It provides a crucial link between the north-western and the south-eastern parts of the city through its core. In November 2017, prime minister Narendra Modi had inaugurated the 30-km Miyapur-Nagole stretch (24 stations) of the 72-km-long elevated Hyderabad Metro Rail project, the world’s largest such public-private partnership project. The concessionaire, L&T Metro Rail (Hyderabad) Limited, is building the project across three corridors.

The governor later travelled from Ameerpet to LB Nagar by the metro train. Speaking at a meeting organised at LB Nagar Metro station, the governor set the target for completion of Hi-Tech City Metro line, as December 2018. Narasimhan said it is the responsibility of travelers, to ensure cleanliness at metro stations in the city. He asked citizens to utilise the metro. “This will give us relief from pollution on the roads, besides fuel savings and also help by allowing emergency vehicles like ambulances, to go freely on the roads. I would request the citizens of Hyderabad to make metro a habit. Train your minds to use the metro,” Narasimhan said, adding that he also uses this mode of transport. See also: Hyderabad Metro: Ameerpet-LB Nagar route to be thrown open, on September 24, 2018 He asked the public to first use the metro and give feedback on how services could be improved and not just criticise it. He congratulated the central and state governments and L&T, for creating a wonderful structure. IT and Municipal Administration minister, KT Rama Rao, said the total project cost would be Rs 14,132 crores. “The state government is spending nearly Rs 3,000 crores for land acquisition, while the central government is giving 1,450 crores towards viability gap funding (VGF) and L&T is investing over 12,000 crores,” he said. Rao said now (in the 30-km Miyapur-Nagole stretch), the metro enjoys ridership of more than one lakh per day and with the operationalisation of the Ameerpet-LB Nagar route, he expressed hope that it would more than double, from the current ridership.

The Ameerpet-Hi-Tech City 10-km line will be open from December 2018, while services between Jubilee Bus Station and MGBS (10 kms) will be launched by mid-2019, HMRL managing director NVS Reddy said. On September 4, 2018, L&T Metro Rail (Hyderabad) had announced that the patronage of HMRL touched 20 million (passengers), since the launch of the services in November 2017. On May 7, 2018, a special coach exclusively for women, was introduced in Hyderabad Metro trains.

Later, the governor got off the metro at Khairatabad Metro station and commuted to Raj Bhavan by a ‘smart bicycle.’ Hyderabad Metro Rail Limited is developing a heritage precinct, with continuous and wide footpaths for seamless pedestrian movement, on a five-km stretch between Police Control Room and Rangamahal Junction, covering five stations. MGBS Interchange Metro Rail station is one of the biggest metro rail stations in Asia. It connects Corridor-I (Miyapur-LB Nagar) and corridor-II (JBS-Falaknuma), said Reddy. Skywalks are being built connecting stations directly to commercial complexes, stadiums and offices, officials said, adding several steps have been taken, to make Hyderabad Metro Rail disabled-friendly. HMRL is the first ‘transit-oriented development’ project that would exploit real estate and earn revenue, by leasing out commercial and office spaces inside and outside metro stations across the city, officials had said.

When will Hyderabad Metro's Jubilee to Mahatma Gandhi Bus Station be operational?

The Jubilee Bus Station to Mahatma Gandhi Bus Station route will be operational soon. Authorities are yet to decide the inauguration day but the safety certificate has already been given.

What is the metro route of Jubilee Bus Station to Mahatma Gandhi Bus Station? 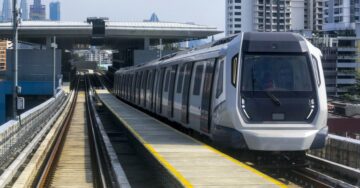