Home » Must Knows » Legal » IFMS and sinking fund: Can a builder rightfully charge both?

Amrendra Kishore bought an apartment in Noida, after spending over a decade in Australia. At the time of taking possession, he paid an upfront amount of Rs 50 per sq ft as Interest Free Maintenance Service (IFMS) to the builder. However, he was taken aback, when the monthly maintenance fee had an additional 20 paise per sq ft as charges towards the sinking fund. Kishore subsequently dragged the developer to the consumer court, over this dual payment.

Globally, the IFMS has replaced the sinking fund. The IFMS amount kept in a bank fixed deposit, for unexpected emergencies and long-term structural renovation. Generally, the IFMS is charged keeping in mind its accumulated interest that would take care of the long-term renovation, if any and other contingencies.

“Unfortunately, in India, the concept of sinking fund and IFMS is not clear. Within the Noida market itself, various developers are adopting various methodologies. While some of them have adopted the global practice of IFMS, there are many others who are charging both, the IFMS, as well as the sinking fund,” says Kishore.

See also: Maintenance charges that buyers need to be aware of

As the legal opinion over this issue is also divided, it discourages home buyers from contesting the dual charges. Developers who are charging IFMS, as well as sinking fund, maintain that the two are different from each other. Sinking fund is a sum that is periodically set aside by the owners of an estate, to cover unexpected emergencies and long-term repair costs. IFMS, on the other hand, is meant to cover the day-to-day costs of the facilities’ upkeep. The developers maintain that they use it to cover the costs that are predictable, recurring and relatively small.

Such costs include the regular payment to contractors, the payment of insurance premiums, minor repairs, etc. However, some developers disagree.

Nikhil Hawelia, managing director of the Hawelia Group, categorically states that the IFMS has been introduced, to replace the earlier sinking fund. “I do not think there is any confusion over the issue. Charging IFMS, as well as sinking fund, is not only unethical on the part of the developer but also illegal. In any case, a developer is only the custodian of the IFMS, till the maintenance is handed over to the residents’ welfare association (RWA). Monthly charges that are levied, are towards the maintenance of the society and not for the sinking fund,” explains Hawelia.

Amit Kumar, an advocate with the Supreme Court, suggests that home buyers should seek clarification from their developers, vis-à-vis the type of association that will be formed and the amount due to such an association. “These charges are always governed by a contract, which is in the form of an allotment letter or MOU or agreement for sale. If the builder is misusing his position to demand amounts, the RWA can approach the Competition Commission of India and/or the consumer forum,” explains Kumar.

As the sinking fund is a nominal amount (which collectively becomes a big amount), most of the buyers do not object, even when it is wrongfully levied, as they are not interested in litigation. Moreover, the concept of IFMS and sinking fund and its short-term and long-term usage, have not been defined in the housing laws of various states. In many cases, there are disputes over the actual amount that should be handed over to the RWA, as the developers who charge the sinking funds monthly, often spend it on a recurring basis. Consequently, these funds remain a bone of contention. 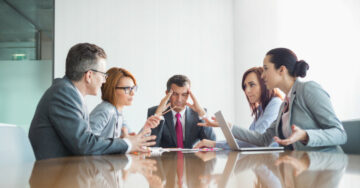 Builder or buyers: Who is responsible for facility management?.