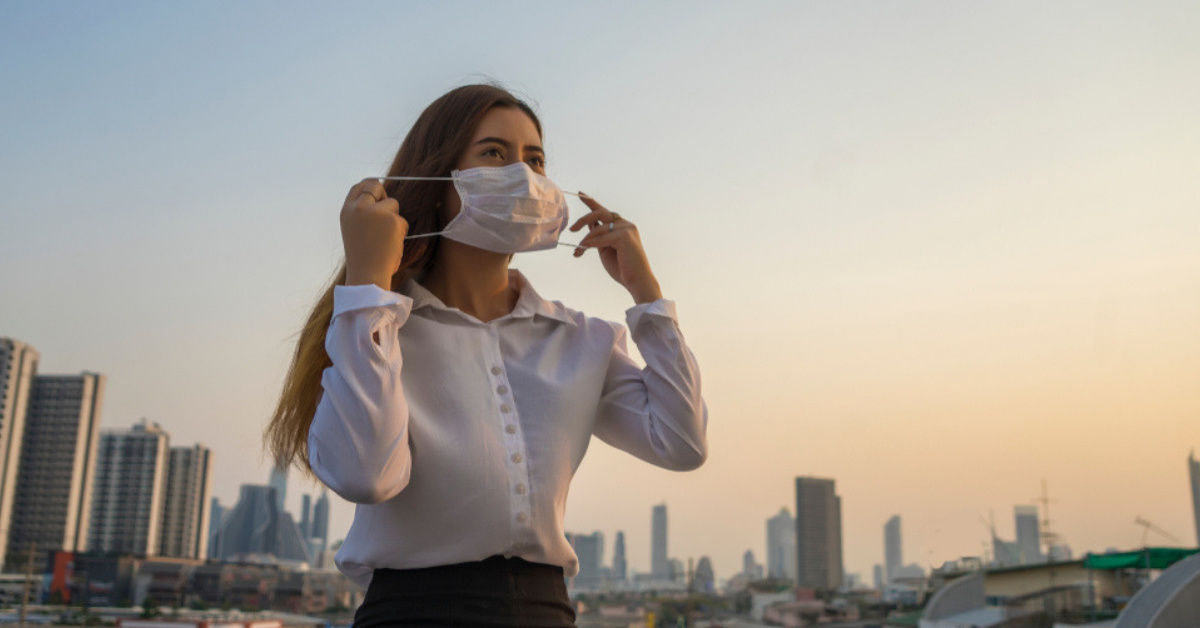 Delhi topped the list of most polluted capital cities in the world in 2019, according to a new report, which also revealed that 21 of the world’s 30 most polluted cities are in India. According to the World Air Quality Report 2019 compiled by IQAir Air Visual, Ghaziabad is the most polluted city in the world, followed by Hotan in China, Gujranwala and Faisalabad in Pakistan and then Delhi in the fifth place.

Most polluted countries in the world

However, the report also mentions that Indian cities have shown improvement from last year. “Whilst cities in India, on average, exceed the World Health Organisation (WHO) target for annual PM 2.5 exposure by 500%, national air pollution decreased by 20% from 2018 to 2019 with 98% of the cities experiencing improvement,” the report said.

Commenting on the report, Avinash Chanchal, senior campaigner at Greenpeace India said the latest report and the one released in the previous year are reflective of the trend that household and agricultural biomass burning is falling but fossil-fuelled energy consumption remains very high. “Power plants have not adhered and missed the deadline to install Flue Gas Desulphurization units to control pollution and the public transportation is nowhere near to be adequate to turn the tide on reducing dependence on private vehicle use. These facts are out in public domain, media reports about it regularly and the public is aware as well. Now the responsibility lies with the government to fix the accountability,” he said.

BS-VI fuel to be available from April 2020

Earlier, Javadekar had informed the Rajya Sabha that fuel conforming to stringent BS-VI emission norms, was introduced in the national capital to reduce air pollution. The minister also informed the upper house that the sale of BS-VI-compliant vehicles, would begin in the country from 2020. He said the government had prepared a national clean air programme for 122 cities of the country, under which schemes for reducing pollution would be made.

In Jaipur, he said the country’s forest area had increased by 15,000 sq kms, as a result of efforts made in the direction of environment protection. He stressed the need to make further efforts, to increase the forest cover to 33% of the total geographical area in the country.

Exposure to toxic vehicular pollution has worsened in India due to staggering pace of motorisation, with the number of registered vehicles going up 700 times from 0.3 million in 1951 to 210 million in 2015, a study has said

June 13, 2019: A study by the Centre for Science and Environment (CSE), titled ‘At The Crossroads’, has revealed that the growing number of private vehicles without adequate public transport in cities, will lock in enormous amounts of pollution and carbon. “It took 60 years (1951 to 2008) for India to cross the mark of 105 million registered vehicles. But thereafter, the same number was added in a mere six years (2009–15). The number of vehicles in India has increased 700 times – from 0.3 million in 1951 to 210 million in 2015,” it said.

“Even when vehicles are emerging as a serious source of exposure in cities, solution at a scale has remained a challenge. This is a serious national issue, as India is in the grip of a staggering pace of motorisation,” it said. “If cars and two-wheelers are combined, the personal motorisation rate in India would exceed that of many advanced countries. Automobile dependence will worsen exposure to toxic vehicular pollution,” the study said. “The situation is dire, as adequate attention has not been paid to the development of public transport systems and promotion of walkable and cycling environments,” it said.

“Cities have to move lakhs of travel trips a day, but without adequate public transport, cities will lock in enormous (amounts of) pollution and carbon,” it added. “Every trip made in a car or two-wheeler pollutes around seven to 14 times more than a trip made in a bus in Delhi. However, bus ridership is declining and even pedestrians and cyclists are under pressure, due to poor infrastructure and unsafe roads,” the CSE said.

According to the Delhi Master Plan 2020-21, public transport ridership should be at least 80% of all motorised trips by 2020-21. A report submitted by the Environment Pollution (Prevention and Control) Authority to the Supreme Court, had said that there is an enormous shortfall in the current level of public transport services. It had called for massive augmentation of public transport, so that people do not use their cars.

Union minister Harsh Vardhan has discredited the recent global reports claiming over one million deaths in India are due to air pollution, saying that such studies were only aimed at ‘causing panic’

May 6, 2019: Union minister for Environment, Forest and Climate Change, Harsh Vardhan, has said that he does not agree with recent data claiming millions of deaths caused by air pollution. “Pollution can cause premature illness and other things. Pollution does affect health but to create such a panicky situation and say millions of people are dying, I do not agree with that,” Vardhan, who is contesting the Lok Sabha polls from Chandni Chowk constituency in the national capital, said. He added that the government was working hard to tackle the problem of pollution and had been supporting the AAP-led Delhi government in this direction. “We are doing our best to handle air pollution. The number of good days are consistently going up and bad days coming down,” he said.

A report by environment NGO Greenpeace recently, stated that Delhi topped the list of most-polluted cities in the world. The US-based Health Effects Institute report revealed that around 1.2 million people were killed in India in 2017, due to air pollution. Countering this, the minister highlighted the initiatives taken by the centre and said aggressive campaigns had been organised in the national capital, to handle pollution. “You must be already aware of our National Clean Air Program (NCAP), which we started pro-actively and aggressively to improve air quality in 102 cities, where we found that consistently for five years, the PM 10 levels were beyond the desirable levels. You know about our Graded Response Action Plan and other activities like rules for dust mitigation and solid waste management. We have been handling it in the most aggressive manner,” he asserted.

See also:  How to deal with indoor air pollution

Vardhan, who is also the Union Minister of Science and Technology, said 60 teams of the Central Pollution Control Board (CPCB) were sent to the national capital to tackle the pollution mess. He said the results can be seen, as compared to the scenario in 2016, 2017 and 2018. The minister also underlined that the city government led by Arvind Kejriwal was helped by the centre in every possible way to curb pollution woes. “On two occasions, we took initiatives jointly. Both the governments (the centre and Delhi government) did historic 15-20 days’ extensive drives, by visiting various sites causing pollution in the national capital,” he said. “We informed the chief minister and the lieutenant governor about it and last year, we made everything transparent on the portal. We are helping the city government in all possible ways,” Vardhan said.

He added that the mobile application SAFAR, was launched for real-time monitoring of air pollution in the city. He, however, added that along with governments, the public should also be conscious and responsible towards environment. “Ultimately, people have to change their habits and focus on environment-friendly actions. That is why, we launched Green Good Deeds movement in the country which has been recognised by the United Nations and talked about in BRICS. We our doing our best. Waste management rules were also modified in 2015-16, to make them more eco-friendly and useful for society,” Vardhan said.

“We have launched the best software in the world for environmental proposals and clearances – PARIVESH. Now, the next step is to ensure that the states also have similar software. We have also reduced our clearance timing from 600 days to 100 days,” he said.

India has 15 out of 20 most polluted cities in world: Study

Fifteen of the 20 most polluted cities in the world are in India, with Gurugram, Ghaziabad, Faridabad, Noida and Bhiwadi in the top six, according to a new study

March 5, 2019: India’s National Capital Region (NCR) has emerged as the most polluted region in the world in the last year, according to a new report. The latest data compiled in the IQAir AirVisual 2018 World Air Quality Report and their interactive World’s Most Polluted Cities Ranking, prepared in collaboration with Greenpeace Southeast Asia, reveals the state of particulate matter (PM2.5) pollution in 2018.

The report identified some of the major sources or causes of ambient air pollution. “Industries, households, cars and trucks emit complex mixtures of air pollutants, many of which are harmful to health. Of all of these pollutants, fine particulate matter has the greatest effect on human health,” it said. “Most fine particulate matter comes from fuel combustion, both, from mobile sources such as vehicles and from stationary sources such as power plants, industry, households, agriculture or biomass burning,” the report added.

See also: India and Germany to collaborate, for implementation of the National Clean Air Programme

Environment activists have expressed concern and said the government’s programmes to clean air should ‘do more than making political statements’. Pujarini Sen, an activist associated with Greenpeace India, said the report was a reminder to us, indicating that we need to put efforts and actions to reduce the invisible killer.

“If we want India to breathe clean air, it is high time that our plans such as the National Clean Air Programme, Graded Response Action Plan and Clean Air Programme, become much more stringent, aggressive, legally binding and most of all implementable at ground, rather than just being used as a political statement without much happening at ground,” Sen said.

Jyoti Pande Lavakare, co-founder of Care for Air NGO, said Delhi and its neighbouring areas have held the dubious distinction of being the most polluted places in the world. “Delhi will remain the most polluted, unless we make a concerted effort on a war footing from the top-down to clean the air. What we need is a ‘clean air czar’ – an empowered, accountable authority whose single goal is to reduce pollution in our country through measurable and time-bound actions,” she said. “This is a national public health emergency and we cannot afford small, incremental progress. We need strong, focussed action that befits a real emergency,” Lavakare added.

Ravina Kohli, environmentalist and a member of #MyRightToBreathe campaign, said the country lacks the ‘political will’ to make public health a priority. “Just because health issues do not historically convert to votes, politicians have slashed budgets, ignored this public health emergency and compromised citizens’ lives. Human lives will matter more than political gain, if we have true leaders in charge,” she added. Ashutosh Dikshit, CEO of URJA, added: “It is for the government to promote eco-friendly industries and construction solutions, as well as hasten the usage of better fuels for automobiles, as well as two-wheelers that are also major polluters. The pollution control boards are toothless and ill-equipped.”