Home » Current News » BMC plans to reward citizens, if potholes are not fixed within a day

A number of citizens have been filing complaints about potholes, ever since the BMC launched the MyBMC Pothole Fixit app, nearly a month ago. The app allows users to register pothole-related complaints in all the administrative wards of the BMC.

Mumbai roads are in bad shape because residents are tolerant: HC

The Bombay High Court has pulled up the BMC, saying that a ‘high level of tolerance’ displayed by Mumbai residents, has allowed the local civic body to be apathetic towards the poor condition of roads

March 15, 2019: A division bench of the Bombay High Court, of chief justice NH Patil and justice NM Jamdar, on March 14, 2019, expressed displeasure over the Brihanmumbai Municipal Corporation (BMC) ignoring its orders on the issue of potholes and bad condition of roads in the metropolis. The bench noted that till date, the civic body had failed to comply with several court orders on the matter. The court was hearing a bunch of petitions about increasing number of accidents and deaths of motorists, due to pothole-ridden roads in the city.

“We do not see compliance in major issues,” chief justice Patil said. The authorities seem to have a ‘very insensitive approach’, he said. “Providing good roads to its citizens, is the basic duty and courtesy of the civic body,” he added. The court said the monsoon would soon arrive in the city and before that, the corporation should be ready with its plans for disaster management, drainage systems and other problems encountered during rains.

“It is not that the corporation is not aware of all these issues and what steps should be taken but they (BMC) also know that people here tolerate everything,” Patil observed. “The tolerance level of people of this city is very high. They will tolerate this too,” he added. BMC counsel Anil Sakhare said the corporation had taken several steps, to address the issue of bad roads and potholes. The court later posted the petitions for further hearing next week. 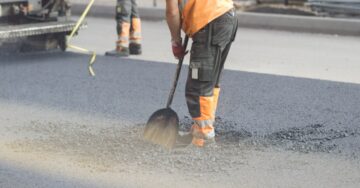 Why not use toll money to repair pothole-riddled roads, asks Bombay HC.