A foot-overbridge (FOB) connecting the Durgabai Deshmukh South Campus Metro station of the Delhi Metro’s Pink Line and Dhaula Kuan Metro station of the Airport Express Line, was opened on February 9, 2019, for passengers after an inspection by Delhi Metro’s managing director Mangu Singh, in the presence of other senior officials, the executive director (corporate communications) of the DMRC, Anuj Dayal said.

The FOB will be a crucial connecting link for passengers using the Pink Line and the Airport Express Line. Many commuters travelling to and from the Terminal 3 of the Delhi international airport, will be able to take this facility and interchange trains. The FOB will connect the platforms of the Durgabai Deshmukh South Campus Metro station of the Pink Line with the concourse level of Dhaula Kuan Airport Line station.

Passengers from all parts of the city such as Mayur Vihar in the east, Ashram, Lajpat Nagar, South Extension, Moti Bagh in the south and Delhi Cantonment, Naraina in the west, will be able to use the FOB via the Durgabai Deshmukh South Campus station to take the Airport Express Line to reach the airport. Till now, the Airport Line was only connected with Blue Line at Dwarka Sector 21.

“The FOB is a major technological masterpiece, as a record 22 travelators have been installed on it for the convenience of the passengers,” Dayal said. The 22 travelators have been installed with landing space of about 15 m in between them. The width of the FOB is about 6.1 m, the DMRC said in a statement. The FOB has also been semi-covered with a curved roof on top and aluminium louvre from the sides with glass railings. It is also equipped with all the safety and security features like CCTV cameras, lighting and PA system, the statement said. Benches have also been provided at some locations where the passengers would be able to take rest.

The DMRC said that construction of the FOB was a ‘major engineering challenge’, due to the presence of multiple 220KV and 33KV high-tension lines at almost all pier locations. In addition, water pipelines of the Delhi Jal Board and high pressure lines of GAIL were also present along the alignment and required constant monitoring, it said. The location of the FOB along the arterial Ring Road made the construction even more challenging. “DMRC’s engineers had to carry out bulk of the construction in the night time so that the flow of traffic was not hampered.  The adjacent Ring Road was not blocked even for a few hours during the construction work,” Dayal said. The Delhi Metro provides interchange facilities between two or more corridors at 25 different locations across the network, thus creating a web of metro corridors criss-crossing each other, he said.

The 9.7-km Lajpat Nagar-Mayur Vihar Pocket 1 corridor of the Delhi Metro’s 59-km-long Pink Line, was thrown open to the public on December 31, 2018

January 2, 2019: The 9.7-km Lajpat Nagar-Mayur Vihar Pocket 1 corridor of the Delhi Metro’s Pink Line, was inaugurated by union minister Hardeep Singh Puri on December 31, 2018, which directly connects south and east Delhi on the rapid transit network. The new segment is part of the 59-km-long Pink Line, which spans from Majlis Park to Shiv Vihar. According to a senior official, passenger services on the corridor commenced from 4 pm.

This extension of the Pink Line, part of the Phase-III of the DMRC network, was inaugurated jointly by Puri and Delhi deputy chief minister Manish Sisodia from Metro Bhawan. Trains will operate between Majlis Park and Mayur Vihar Pocket 1 at a peak hour frequency of five minutes and 12 seconds. During the non-peak hours, the frequency will be five minutes and 45 seconds. A total 29 trains will be operational on this line, officials said. Following this, only a 1.4-km stretch between Mayur Vihar Pocket-1 and Trilokpuri Sanjay Lake stations of the Pink Line, remain to be linked.

“The work on the Phase-III of the DMRC has been almost completed, with nearly 96 kms of it being made operational this year. South and east Delhi have now been connected directly on the network and commuters can save time by using it, who otherwise had to rely on road transport or a longer route on the Delhi Metro,” Puri said. “The new Mayur Vihar Ph-1 station is an engineering marvel as it has been constructed on a narrow road with only 13 metres of width. The viaduct adjacent to the station passes at a height of 23 metres and goes above the Dwarka-Noida Blue Line viaduct as well as a road flyover. The new station has a length of 140 metres and has 11 escalators and six lifts,” the DMRC said.

The Hazrat Nizamuddin Metro station on the Majlis Park-Shiv Vihar Pink Corridor of Delhi Metro’s Phase-III will become one of the metro network’s major transit hubs, as the station would provide direct connectivity with the Hazrat Nizamuddin Railway Station, as well as the Sarai Kale Khan Inter State Bus Terminus. With the opening of the new section of the Pink Line, the total operational length of the DMRC has increased to 327 km with 236 stations.

The 9.7-km Lajpat Nagar-Mayur Vihar Pocket 1 corridor of the Delhi Metro’s Pink Line, which was recently inspected for safety, will be thrown open to passengers from December 31, 2018

December 28, 2018: The Delhi Metro has a new year’s gift for its riders, as the 9.7-km Lajpat Nagar-Mayur Vihar Pocket 1 corridor of the Pink Line, is all set to be opened for the public on December 31, 2018. The section, which has five stations, three underground and two elevated, was inspected by the Commissioner of Metro Railway Safety (CMRS), on December 24, 2018, who has accorded the mandatory approval for the commencement of passenger operations, a senior DMRC official said.

“This extension of the Delhi Metro’s Pink Line will be formally flagged off by union minister of state (independent charge) Hardeep Singh Puri and Delhi’ deputy chief minister Manish Sisodia on December 31, 2018, at 11 AM from Metro Bhawan. Passenger services will commence on this section on the same day, from 4 PM onwards,” the official said.

The Commissioner of Metro Railway Safety has inspected a 9.7-km stretch of the Delhi Metro’s Pink Line, from Lajpat Nagar to Mayur Vihar Pocket 1, spanning five stations, paving the way for the commencement of commercial operations on this stretch

The DMRC also inaugurated an exhibition in the upper area of the foyer of Rajiv Chowk station, on completion of 16 years of its operations. Former prime minister Atal Bihari Vajpayee had inaugurated the DMRC’s first-ever corridor – an 8.2-km stretch between Tis Hazari and Shahdara stations of the Red Line –  on December 24, 2002. Recently, the 3.2-km-long Escorts Mujesar-Raja Nahar Singh (Ballabhgarh) section of the Violet Line was opened to the public in November 2018, taking the entire span of the Delhi Metro network to 317 km. While the Shahdara-Tis Hazari section had six stations, DMRC now boasts of 231 stations, with an average daily ridership of about 28 lakhs. The official said, as part of Phase IV of the DMRC, a 103-km-long project has been proposed.

With the inauguration of the Shiv Vihar-Trilokpuri Sanjay Lake section of the Pink Line, Delhi has joined a select list of cities, where the metro network exceeds 300 kms

November 1, 2018: The 17.8-km Shiv Vihar-Trilokpuri Sanjay Lake section of the Pink Line, was opened to the public on October 31, 2018, putting Delhi among a select group of cities such as London and Shanghai that have an operational metro network of over 300 kms. The Delhi Metro network has now expanded to nearly 314 kms, with 229 stations with the operationalisation of the new corridor.

With its opening, the Delhi Metro also joined the league of top metro networks around the world, which have an operational length of over 300 kms, like those in London, Beijing, Shanghai and New York, Delhi Metro officials said.

Addressing a gathering at the inauguration function held at the Metro Bhawan, union housing and urban affairs minister Hardeep Singh Puri said, “The journey that started in 2002 has passed the 300-km-mark today (October 31, 2018) to reach 314 kms. The metro project in Delhi is a global success.”

However, due to infrastructure constraints, trains on the Trilokpuri Sanjay Lake-IP Extension section on this corridor will ply on a single route, with a frequency of around 15 minutes and 36 seconds, officials said. A bottleneck near Trilokpuri station has arisen due to multiple issues, including land acquisition, resulting in a portion of the metro segment of about a few kilometres remaining incomplete, rendering the Trilokpuri Sanjay Lake station, a terminus.

Also, only every third train will go to Trilokpuri station from IP Extension, due to the single line operation on the down line due to non-availability of cross-over facility at Trilokpuri, executive director of corporate communications at DMRC, Anuj Dayal said. The train services between IP Extension and Shiv Vihar section will be run as per normal practice on both the lines at a peak hour frequency of five minutes and 12 seconds, officials said. “However, passengers heading towards Trilokpuri or Shiv Vihar will be required to change trains at the platform level itself, at Maujpur-Babarpur station. “This interchange is necessitated since Maujpur-Babarpur is designed to meet Phase-IV requirement, as an interchange station with four platforms,” Dayal said.

In construction of this section, the Delhi Metro has achieved a rare feat, by crossing over its existing operational line (Blue Line) at the Karkardooma Metro Station (old one) at a record height of 21 metres above the ground, making it the second-highest structure in the network. The highest point in the metro lies in Dhaula Kuan area, between Mayapuri and South Campus metro stations of the Pink Line, at a height of 23.6 metres – as high as a seven-storey building. Also, the metro has constructed a double-decker train depot at Vinod Nagar, Dayal said. “We had a land constraint, so we built a double-decker structure for parking, which is quite unusual. Besides this facility, some of the trains would be stabled elsewhere,” he said. 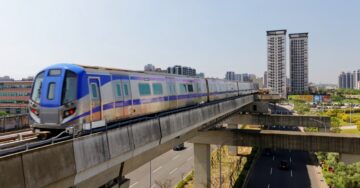 Delhi Metro’s Shiv Vihar-Trilokpuri section to be opened on October 31, 2018.