Pune’s low office space vacancy rate of around 6%, is proving to be a serious challenge for companies that are seeking large spaces to establish or expand their operations in the city. Pune is currently witnessing a commercial real estate supply crunch, across most sub-markets. This leaves hardly any option for large occupiers, with immediate requirements or with limited ability or willingness to wait for the supply issues to ease. 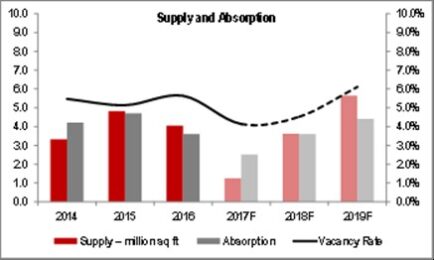 The limited availability of spaces within Grade A office projects in Pune, is causing tenants to commission built-to-suit constructions, pre-committing to space in under-construction projects or opting for Grade B properties. Recent examples:

With the limited availability of and high demand for quality office spaces in the city bringing about the lowest vacancy rates in three years, rents have steadily increased. Gross rents for good quality commercial spaces in Pune grew by 8.5% in 2014, 11.5% in 2015 and 7% in 2016.

Forecast for office space in Pune

There are two possible solutions to this situation. As a long term measure, Pune’s office space developers are obviously intent on launching new projects, which would take time to hit the market as ready supply. Most of the upcoming large projects are in the initial construction stages and may take between 18-36 months to complete. A short-term option to induce faster supply, is to revive under-performing or non-performing commercial buildings in the retail or hospitality segment and converting them into office spaces. In fact, the market is heading towards both these directions to reduce the demand-supply gap.

Pune is expected to see commercial real estate supply of around 11 million sq ft until end-2019, out of which 80% is likely to hit the market in 2018 and 2019. A healthier pipeline for office spaces, will allow occupiers to choose spaces with more flexibility and help the city to establish a badly-needed demand-supply equilibrium in the segment. Office space vacancy in Pune is projected to rise by a mere 6% in the next 2-3 years. Another source of supply that emerged recently, is the refurbishment of retail or mixed-use developments, with commercial space as a part of the product mix. 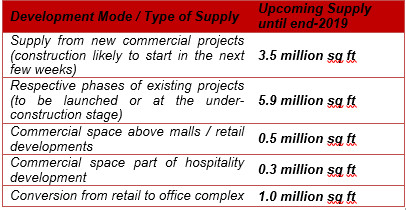 Against the mentioned supply, the city is expected to see absorption of 10 million sq ft from 2017 to 2019. However, absorption is estimated based on the current visibility of projects under construction and announced so far. As the chart above indicates, the minimum variation in vacancy rate, is because of almost similar demand and supply, while augmented supply has resulted in improved absorption numbers. This means that office space demand in Pune is strong but handicapped because of supply issues.

The city is likely to see the emergence of new commercial district nodes, such as Nanded City, Pirangut and the PCMC area. These areas have managed to attract prominent developers, due to their strategic location, comparatively lower land costs, good connectivity to central areas and predominantly because of their residential catchments. Pune’s office space supply crisis will result in the opening up of new commercial areas and solve the problem of failed malls at the same time.