The residential real estate market has witnessed its lowest first-half sales and launches in the last five years, along with a resurgence of the affordable housing sector in H1 2017, says a report titled ‘India Real Estate, January-June 2017’, by Knight Frank India. In the office segment, H1 2017 vacancy levels were at the lowest since the global financial crisis, even though the IT/ITes sector took a hit, according to the seventh edition of the flagship half-yearly report. The report presents a comprehensive analysis of the residential market across eight cities (Mumbai, NCR, Bengaluru, Pune, Chennai, Hyderabad, Kolkata and Ahmedabad) and the office market performance across six cities (Mumbai, NCR, Bengaluru, Pune, Chennai and Hyderabad). 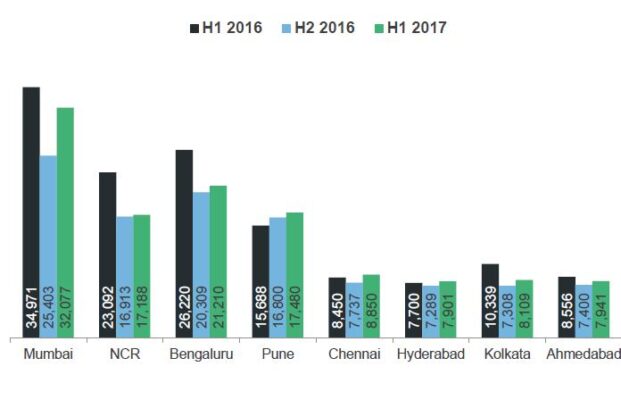 “Launches have been hit more than sales. Developers are giving priority to completion of projects and becoming RERA-compliant, which eventually will augur extremely well for the industry. On the price front, Mumbai, like other cities, is undergoing a time correction. Going forward, since Maharashtra is one of the front runners in having a RERA regulator in place, we believe that this city may come out of the hiccups of policy interventions soon,” said Samantak Das, chief economist and national director – research, Knight Frank India. Speaking about the report, Shishir Baijal, chairman and managing director, Knight Frank India said, “Some of the most path-breaking reforms in independent India, came to force in quick succession over a span of a few months. Described by many as the battery of reforms against black economy in an unorganised sector, brave policy decisions such as demonetisation, the Real Estate (Regulation and Development) Act, 2016, the Benami Transactions (Prohibition) Amendment Act, 2016 and the recently rolled out Goods and Services Tax (GST), have pushed the already sluggish residential market to the brink. However, we believe that these corrective measures were long due, to transform real estate into a robust, transparent and thriving industry. The short-term hiccups grappling the sector would eventually fade away and bear rich dividends in the future.” “The commercial real estate sector has been the most dependable segment of the overall market. However, some recent geopolitical disruptions in the advanced economies had a bearing on office transactions, even as the country continues to grapple with shrinking commercial real estate. However, the investment environment is changing and we expect a radical difference in the office landscape, on the back of institutional funds foraying into the sector,” Baijal added.