A Supreme Court bench headed by justice Dipak Misra, on March 27, 2017, asked the directors of real estate major Unitech Ltd, including its managing director, to appear before the court on May 5, 2017, to explain cases of delays in granting possession of flats to home buyers in its project.

The court had, on February 20, 2017, asked the builder to deposit 14% interest on Rs 16.55 crores invested by 39 home buyers with it. The 39 home buyers, who moved the court, had booked flats in Unitech’s Vista housing project in Gurugram. They had sought a refund of their principal amount, totalling Rs 16.55 crores with interest, after the developer, which had promised to give the possession by 2012, delayed it.

See also: Is your property possession delayed? Here’s what you can do

The court had said that interest will be calculated by the developer from January 1, 2010 and asked the real estate major to deposit the amount with the apex court registry within eight weeks. The bench had also directed the registry to disburse 90% of this amount to home buyers, on a pro rata basis, as was done while giving a refund of the principal amount.

Over two dozen home buyers of Unitech’s housing projects in Noida and Gurugram, had approached the National Consumer Disputes Redressal Commission (NCDRC) after the builder failed to give them possession of the flats as the per schedule. The consumer forum had asked Unitech to refund the money to the home buyers, with interest.

The apex court, in another matter, had earlier asked the company to deposit an interim penalty of Rs 5 crores with the court registry, after the firm had challenged the order of the consumer forum asking it to pay Rs 5 crores penalty to three buyers in its Burgundy project. The court had said the penalty deposited with the court will be awarded to the buyers or returned to Unitech, depending on the outcome of the case. 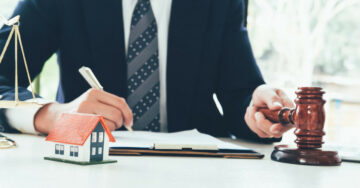