Almost 80 per cent work of designing of the bridges, viaducts and tunnels, on the country’s first bullet train between Ahmedabad and Mumbai, has been completed by engineers based in Delhi, Mumbai and Japan, said Achal Khare, managing director of the National High Speed Rail Corporation (NHSRC), which is implementing the project. A process has also been initiated to acquire land for the project.

Prime minister Narendra Modi and his Japanese counterpart Shinzo Abe, had in 2017, launched the ambitious project, which is expected to be completed by 2022. The high-speed train would cover the distance of over 500 kms between the two cities in less than three hours, from the present seven hours. The train will halt at 12 stations, out of which four fall in Maharashtra. Japan has extended a soft loan for the project, which is a joint venture between the Indian Railways and Japan’s Shinkansen Technology.

The proposed corridor will start from the Bandra-Kurla Complex (BKC) in Mumbai and end near the Sabarmati Railway Station in Ahmedabad. The works of surveying the route and soil testing are underway, Khare said. The preliminary work of acquiring land in both the states has also begun, he said. “Our route passes through 108 villages of Maharashtra. A majority of these villages fall in Palghar district. We have issued a notice to acquire land in 17 villages and informed the land owners about it,” Khare said. Those who give their land will be compensated over and above the current prevailing market rates. Those who do not turn up, their lands will be acquired under Section 19 of the Land Acquisition, Rehabilitation and Resettlement Act 2013, he said.

The NHSRC has earmarked Rs 10,000 crores for the purpose, he mentioned. The entire project will be fire and earthquake resistant. Seismometers (a ground motion detection centre) will be installed in the earthquake-susceptible areas, while the wind monitor systems will also be put up, he said. “The speed of the train will depend upon the velocity of the wind and in case of wind blowing at 30 metres per second, the train operation will be stopped,” Khare said.

“Though the entire 508-km corridor will be foolproof, however, we are focusing on a strong evacuation system and in case of any eventuality, a relief car will arrive within eight to 10 minutes,” he said. The train will attain the maximum speed of 320 kms per hour in 320 seconds and by this time, it will travel up to 18 kms, the official said. He said passengers will reach from BKC in Mumbai to the neighbouring Thane in just 10 minutes and to Virar in Palghar district in 24 minutes.

The plan is to run three trains during peak hours and two trains in the non-peak hours, Khare said. “We will have two types of train operations. A few trains will have limited stops while others will stop at all the stations between Mumbai (BKC) and Sabarmati,” he said. “There will be a total of 70 trips each day (35 in each direction) between the two stations and according to our estimates, our ridership will be 40,000 passengers per day,” he further said.

The limited halt trains will stop at BKC, Surat, Vadodara, Ahmedabad and Sabarmati stations, he said, adding that before the launch, the empty trains will have extensive trial runs of about 10,000 kms. The 10-car train will have a business class and nine cars of the standard class. “After 2033, the trains will have 16 cars,” Khare told reporters. 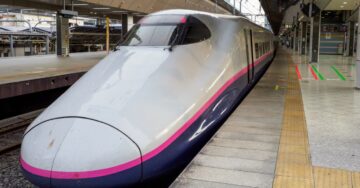 [fbcomments]
For any feedback, write to us at editor@housing.com.
https://seo.housing.com/api/v1/housing_news?tags=ahmedabad,Ahmedabad%20Mumbai%20bullet%20train,Bandra-Kurla%20Complex,BKC,bullet%20train,land%20acquisition,Land%20Acquisition%20Rehabilitation%20and%20Resettlement%20Act,Maharashtra,mumbai,National%20High%20Speed%20Rail%20Corporation,NHSRC,Palghar,Sabarmati,Surat,Thane,Vadodara,Virar