Noting that factors, such as road infrastructure and inflation seem to be closely linked to residential price movements, a report titled ‘Indian Real Estate: Comprehending the varying speeds of growth’ by JLL India and CII, has said that improving infrastructure would be paramount, if affordable housing in the peripheral city areas are to serve the purpose of providing a suitable living environment as well as suitable connectivity to core city’s business districts.

“This theory becomes clearer, when we compare the pan-India average residential prices to the total length of road constructed in India annually which is released by the Ministry of Roads. There was a strong inverse correlation between the two indicators, suggesting that when new roads are constructed across rural and urban areas, the spread of development happens over a wider geography. This could potentially bring down the premium that certain urban agglomerations command for having better connectivity. This could be particularly true for infrastructure-starved cities in India such as Mumbai and Bengaluru,” the report said.

India’s consumer inflation also has a strong bearing on the residential sector, through the housing loan channel. “There is a strong inverse correlation between inflation and housing loan growth, with the latter picking up pace when the former drops. Consequently, the forward guidance on inflation given by the RBI, would act as a key tool for many potential home buyers and housing finance institutions,” it said.

The larger urban agglomerations of NCR-Delhi and Mumbai have seen prices rise appreciably in the past and that has now given way to a paring down of prices as demand has levelled off. Most of the established residential markets are currently experiencing the pains of peak levels of unsold inventory with sales rate trending at much lower than the pan-India long term average sales rate. The flattening of price growth in recent times is also a result of the lower sales as unaffordability and timely delivery issues, coupled with a high interest rate regime have stifled the sector that is facing a prolonged phase of stagnation.

In the latest quarter, for the first time in four years, we observed that inventory levels for the top metros have shown a decline from their peaks and that is a direct result of a corresponding fall in quarterly launches at a pan-India level which is also an occurrence that has happened for the first time over the same time period. Blaming high prices and the unsold inventory for the residential real estate segment’s present woes, the report said: “An unsold inventory of around 18-20 months is typically considered normal in today’s circumstances. However, the average unsold inventory since the global financial crisis erupted in 2008, until 2015, stands at 25 months. Against this backdrop, prices continued to rise on the back of rising input costs and untamed margin expectations of the developers and investors. Continuous rise in prices, in many cases faster than rise in incomes and inflation, resulted in homes starting to become unaffordable across major city centres.”

While lauding the government’s various initiatives towards its mission of ‘Housing for All by 2022’, it maintained that actual implementation and local regulations/ policy framework, will remain crucial to its success.

In a post-RERA environment, while developers will be unable to undertake a project pre-launch phase, a lot of end-user money will also be deployed post all project approvals and official project launch. Some portion of this money, based on risk appetite was earlier deployed in the pre-launch phase as well, although to a lesser extent compared to pure speculative investors. The primary motive of RERA is protection of consumer interests and redressal of their grievances, arising from project delivery delays and deviations from project plans. It is therefore, likely that end-users will be conservative and unwilling to invest before the project approvals are in place. As entry prices usually are higher post project approvals, residential investments at a later stage are also likely to limit the returns that would be available upon exits from this sector going forward.

Residential rental yields on the other hand, are one of the lowest in India, and that is a systemic issue in India. What this split between the revenue yield and capital value returns means is that while the residential asset class has shown faster capital value growth across cities and certain sub-markets, the commercial asset class has shown fairly well-spread returns on the rental as well as capital values front. The residential sector has been largely dependent on capital value appreciation as a means to provide returns to its investors. As soon as this appreciation tapered off, the sector started looking unattractive. While the investments from individual, retail investors, who were the main drivers of capital values, have seen a tapering, institutional money is still finding its way in to this asset class, albeit in a conservative or strategic form of investment flows.

Cities, particularly in South India, which are largely driven by end-user demand, have shown relatively stable growth, and hence, still retain an opportunity for further value creation. The more healthy an urban agglomerate (in terms of offering job opportunities, good education, a fine work life balance, high sanitation and health standards), the more likely is a hitherto investor in the city to convert into an end-user. On the other hand, speculative corridors are likely to suffer more pain in the medium-term before they find their new price levels and future growth. In the residential sector, major thrust of the money invested has been towards under-construction projects, a large proportion of returns, therefore, come from capital value appreciation. A typical residential project life cycle and its associated pricing levels are shown below for illustration purposes. Factors such as initial investor interest and sales velocity are also determinants of the pace of capital value growth in a project. 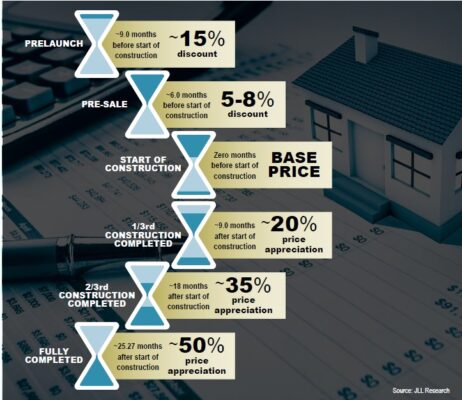 Within the affordable housing segment, providing credit facility at cheaper rates remains important. An important element of achieving the desired results is participation of the private sector. This assumes higher significance when one looks at the poor track record of Urban Local Bodies (ULBs) and government agencies in creating new urban residential units. However, as the affordable housing pie is one having smaller ticket sizes, there needs to be enough incentives and easier procedures to allow this sector to take flight.

In the three metros of Delhi, Mumbai and Bengaluru, a majority of new project launches are priced in the ‘above INR 65 lakhs’ category, which indirectly means that houses in this category have been identified as faster selling and finding more acceptance by buyers for various factors such as location, configuration, amenities and support infrastructure. On the other hand, a majority of houses that are currently priced ‘up to INR 65 lakhs’ are generally located in the outer peripheries of these main cities, given the constraints of land pricing and availability.

Overall, the report noted that endemic and regulatory concerns have been at the heart of issues impacting the real estate sector. Price stagnancy and falling sales are probably the indicators that the sector needs to improve its performance and address the trust deficit it currently faces from its consumers, it said.