Union housing and urban affairs minister Hardeep Singh Puri and Delhi chief minister Arvind Kejriwal, on October 4, 2019, flagged off the first train on the Delhi Metro’s Dwarka-Najafgarh corridor (known as the Grey Line) in the morning. “The wait of years of Najafgarh people has ended. Now you can reach any corner of Delhi within one hour,” Kejriwal tweeted in Hindi. “It is a historic day, as many colonies and villages in Najafgarh, as well as Matiala, will be benefitted by this connectivity. This section is being expanded up to Dhansa Bus Stand, because of which many more villages till the border of Haryana will come under the metro network,” Delhi transport minister, Kailash Gahlot added.

A peak-hour frequency of 7 minutes and 30 seconds shall be maintained on this stretch, Anuj Dayal, executive director, corporate communications, of the DMRC said. The total travel time on this section shall be 6 minutes and 20 seconds. “Three trains shall ply on this section and a fourth train has been planned,” he said. With the opening of this section, the Delhi Metro network will expand to 377 kms with 274 stations, including the Noida-Greater Noida Aqua Line.

Also read all about the DMRC metro rail network

The Delhi Metro’s Dwarka-Najafgarh corridor is likely to be thrown open to commuters soon, with the commissioner for metro rail safety giving his approval

September 26, 2019: The Delhi Metro’s over 4.2 km-long Dwarka-Najafgarh corridor (Grey Line) is likely to open soon, with the commissioner for metro rail safety (CMRS) according the mandatory approval for starting passenger operations, officials said, on September 26, 2019. CMRS Janak Kumar Garg had inspected the corridor for safety on September 25, 2019. “He has accorded the mandatory approval for the commencement of passenger operations on the 4.295-km Dwarka-Najafgarh section of the Delhi Metro, paving the way for its opening,” a senior Delhi Metro Rail Corporation (DMRC) official said. The exact date for commencement of operations shall be communicated shortly, he said.

The Grey Line, consists of three stations – Dwarka (interchange with Blue Line), Nangli and Najafgarh and it will connect the outer Delhi locality of Najafgarh with the rest of the city. Of the three stations in this corridor, Dwarka and Nangli are elevated ones, while Najafgarh station is underground. The DMRC had earlier said that the corridor would be extended by another 1.18 kms till Dhansa Stand, which is slated for completion by December 2020.

The Delhi Metro has commenced trial runs on the Dwarka-Najafgarh corridor, which is scheduled to be opened to passengers by September 2019

July 17, 2019: Trial runs on the over 4.2-km-long Dwarka-Najafgarh corridor of the Delhi Metro have started, officials said, on July 16, 2019. “Trial runs have been started on the 4.295-km Dwarka-Najafgarh Metro corridor. The line is targeted for completion by September 2019,” the DMRC said.

Of the three stations in this corridor, Dwarka and Nangli are elevated ones, while Najafgarh station is underground. The DMRC also said that the corridor is being extended by another 1.18 kms till Dhansa Stand and is slated for completion by December 2020. “During the trial runs, the interaction of the metro train with physical infringements (civil structure) will be checked, to ensure that there is no physical blockage during the movement of the train on the track. Signalling trials are expected to begin in the days to come,” the DMRC said.

The Delhi Metro’s total operational network at present stands at over 343 kms, with multiple corridors, and 250 stations, with its footprints in various cities neighbouring Delhi. An average of about 28 lakh commuters use the Delhi Metro every day.

Passenger services on the Dwarka-Najafgarh section of the Delhi Metro is likely to begin by September 2019, while work on the Najafgarh-Dhansa Stand extension of this corridor has also started, according to Delhi Metro officials

January 25, 2019: Over 90 per cent of the construction work on the 4.29-km Dwarka-Najafgarh section of the Delhi Metro has been completed and passenger services on the stretch, are expected to begin by September 2019, officials said, on January 24, 2019. Also, the work on the Najafgarh-Dhansa Stand section, using a tunnel boring machine (TBM) started on January 24, which will bore a 700-metre-long tunnel in the 1.2 km segment, they said. The Najafgarh-Dhansa Stand section is an extension of the Dwarka-Najafgarh segment.

“The work for the Dwarka-Najafgarh section was formally awarded in late 2017 and the target date for completion is December 2020. On this section, over 90 per cent of the construction work has been completed and passenger services are expected to start by September,” the Delhi Metro Rail Corporation (DMRC) said, in a statement. A DMRC spokesperson said the TBM first used on the up line will be subsequently used for tunnelling on the down line between the same stations. The entire tunnelling work on both, the up and down lines, will be completed by September 2019, he said.

The Najafgarh-Dhansa Stand stretch is entirely underground. While 700 metres of it will be constructed using the TBM, the rest will be done using ‘cut and cover’ technology, in which excavation is done for underground construction and then the area is covered again, the DMRC said. As part of its third phase of expansion, the DMRC has constructed close to 54 kms of underground sections, which is more than the span of such sections constructed in its first and second phases, the DMRC said.

“About 30 TBMs were put into use for carrying out such massive underground tunnelling work. It was a tremendous engineering challenge, since Delhi is an extremely crowded city and tunnelling had to be done beneath centuries-old buildings and congested localities,” the statement said. TBMs were introduced for the first time by the DMRC during the first phase of metro construction work. In Phase II of the Delhi Metro, 14 TBMs were used while in Phase III, the number of such machines used was 30, it added. The Delhi Metro currently operates a network of 327 kms with 236 metro stations. This network includes over a 100 kms of underground lines spread across the national capital, it said. 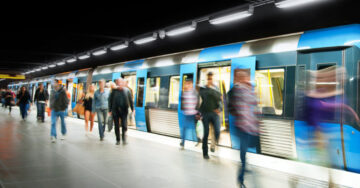 [fbcomments]
For any feedback, write to us at editor@housing.com.
https://seo.housing.com/api/v1/housing_news?tags=Delhi,Delhi%20Metro,Delhi%20Metro%20Rail%20Corporation,Dhansa%20Stand,DMRC,Dwarka,Najafgarh