The Godrej Group has moved the Bombay High Court, challenging the proposed acquisition of its prime property in suburban Vikhroli, to pave way for the government’s ambitious bullet train project between Ahmedabad and Mumbai. The conglomerate has sought a direction to authorities concerned, to change the project’s alignment, so that it can get nearly 8.6 acres of land belonging to its infrastructure arm Godrej Construction out of the project’s map.

As per the current alignment of the bullet train project, of the total 508.17 kms of rail track between Mumbai and Ahmedabad, about 21 kms is planned to be underground. One of the entry points to the underground tunnel falls on the land in Vikhroli. The petition, filed in June 2018, is expected to be heard by a single judge bench of the high court on July 31, 2018. The bullet train project is also facing opposition from farmers in Gujarat and Maharashtra. Four farmers from Gujarat have petitioned the high court in their state, challenging the land acquisition.

The foundation stone for the project was laid by prime minister Narendra Modi and his Japanese counterpart Shinzo Abe, in September 2017, in Ahmedabad. The country’s first bullet train will run at a maximum speed of 350 kms per hour, covering the stretch in under three hours from the usual seven. The train will halt at 12 stations, out of which four will be in Maharashtra. 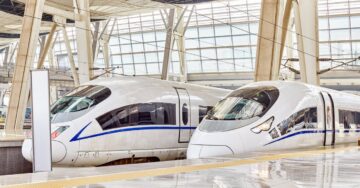