There has been a whopping 50 per cent jump in overall new housing launches in Q2 2018, over the preceding quarter, with the maximum supply in the affordable segment (less than Rs 40 lakhs). Interestingly, the affordable housing supply increased by 100 per cent in Q2 2018 over Q1 2018 and this supply has led the overall growth.

On the sales front too, housing sales across the top seven cities of India (NCR, MMR, Chennai, Bengaluru, Pune, Kolkata and Hyderabad) also rose by 24 per cent, compared to Q1 2018, indicating that hitherto abstaining home buyers are back on the market. Developers are working hard to clear unsold inventory, with attractive schemes, freebies and discounts. Moreover, the positive impact of the policy reforms, including RERA and GST, have begun to bear fruit. 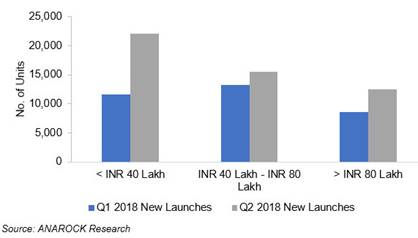 The top seven cities witnessed new unit launches of around 50,100 units in Q2 2018, as opposed to 33,400 units in Q1 2018. The major cities contributing to Q2 2018 new unit additions, include the Mumbai Metropolitan Region (MMR), National Capital Region (NCR), Bengaluru and Pune, altogether accounting for 75 per cent of the new supply. In terms of housing sales during Q2 2018, the top even cities together witnessed an increase of 24 per cent over the previous quarter. Around 60,800 units were sold in Q2 2018 with the NCR, MMR, Bengaluru and Pune together accounting for 81 per cent of the overall sales. End-user-driven Bengaluru led the pack, on the back of re-ignited interest from IT/ITeS professionals reacting to the mitigated job risks and overall favourable economic environment.

Marginal price increase: Residential property prices across the top cities increased by one per cent in Q2 2018, compared to the previous quarter, barring Chennai and Kolkata (where prices remained stagnant). The ample unsold stock, is keeping price growth in check.

Dominant segments: The market continued to be dominated by the affordable and mid-range segments. 77 per cent (38,600 units) of unit launches were in the price category of less than Rs 80 lakhs. The affordable segment accounted for a whopping 46 per cent share of the total new launches.

Considering the growth in supply and sales in H1 2018, the upcoming festive season may finally be a vibrant one again, more so as more new launches across the major cities will offer buyers a wider spread of options and help control prices. However, whether infrastructure status to affordable housing and sops for MIG-I and MIG-II home buyers under the PMAY will help fulfil the government’s vision of ‘Housing for All by 2022’, remains hard to say. Nevertheless, what is certain is that affordable housing has kept the market’s momentum going for some time now. If developers remain focused, add only relevant supply and ensure 100 per cent RERA compliance, we may yet see this dream project become a reality.