The architecture of traditional houses in Kerala

Traditional houses of Kerala are still relevant. People have preserved their homes and the concepts of vernacular architectural designs. The land surrounding the houses has ample growth of fruits, vegetables and coconut trees. Houses are constructed as per Vaastu Shastra, which suggests the east and north direction for the entry of a house. Besides aesthetics and comfort, the houses are planned to deal with climatic conditions. Kerala’s traditional houses are built to withstand heavy rain and heat. The traditional architecture of Kerala is known for its use of natural materials and comfortable, well-ventilated interiors. Granaries, cattle sheds, kitchens, dining halls, bathrooms, bedrooms, puja rooms, and a well or pond are part of a well-designed traditional house called nalukettu.

The traditional architectural style of the houses in Kerala is called nalukettu. Nalu means four and kettu means blocks. A nalukettu refers to a rectangular structure where four blocks are linked by an open courtyard. Nalukettu is largely single-storeyed and made with wood. They can be two-storeyed or three-storeyed and have laterite-and-clay mixture walls. The blocks denote directions – vadakkini (northern block), padinjattini (western block), kizhakkini (eastern block) and thekkini (southern block). Kizhakkini is the puja room, thekkini is for keeping wealth and family rooms, padinjattini is for storage (grains in old days), and vadakkini is for the kitchen. The outer verandas along the four sides of the nalukettu are enclosed differently. The west and east verandas are kept open while the north and south verandas are enclosed or semi-enclosed. A traditional Kerala house can be nalukkettu (4-block structures), ettukkettu (8-block structure) or pathinarukkettu (16-block structure), depending on the size of the plot. This style of architecture is adopted by both traditional wealthy families, and modern well-to-do families. A nalukkettu that has belonged to a particular family for generations is known as tharavad (ancestral home).

Features of a traditional house in Kerala

The traditional houses in Kerala are usually designed with clay, timber wood, palm leaves, and locally-sourced stone and wood, and are in harmony with nature. Laterite is the local building block that Keralites use for construction. Timber has also been an important construction material in Kerala. Usually, teak wood, mahogany, sandalwood, and the wood from the jackfruit tree is used for house constructions. Skilled craftsmen showcase their talent through accurate joinery and assembly, and ornate carving on wooden columns, walls and roofs, which are unique to Kerala architecture. Wood is also used for the gables and the roof that are thatched with coconut palm leaves or tiles, and supported by wooden columns and rafters. Traditional homes are known for large verandas. Clay is extensively used for walls, filling the timber floors, and making bricks and tiles.

The most noticeable feature of the traditional houses in Kerala are the red and brown sloping roofs. As Kerala receives heavy monsoon, homes are designed with sloped roofs covered in terracotta tiles that help in water drainage and keep the interiors cool during humid weather. Gabled windows at the top of a nalukettu ensure cross-ventilation and allow entry of light into the attic. Entrance in traditional houses of Kerala

A padippura is a peculiar feature on top of a nalukettu gate that comprises an elaborate, temple-like gopuram. This arched entrance begins with the fencing of the house and has an impressively designed door with a tiled roof.

Courtyards in traditional houses in Kerala

Courtyards are an integral feature of every Kerala house with most family functions taking place in this part of the house. The courtyard is called the nadumuttom and is the prime centre of a Kerala house. It is usually square and is located in the exact centre of the house. As per Vaastu Shastra, it is a column-free space. The tiled roof slopes of the nadumuttom protect the veranda and inner spaces from heat and rain. In the nalukettu design, all the rooms are open into a common courtyard that aids natural ventilation adequate lighting for the house. 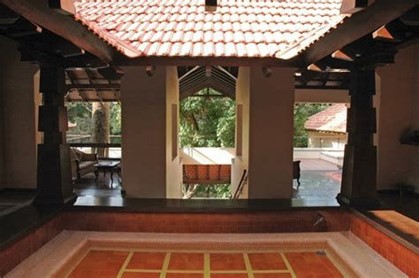 Traditional houses in Kerala have charupadi, a built-in wooden seat in an extended porch or balcony, called the poomukhom, facing the entrance. This veranda allows one to relax and enjoy the views around the home, the breeze, and the rain. Traditionally, these were made for the family and visitors to sit and socialise. 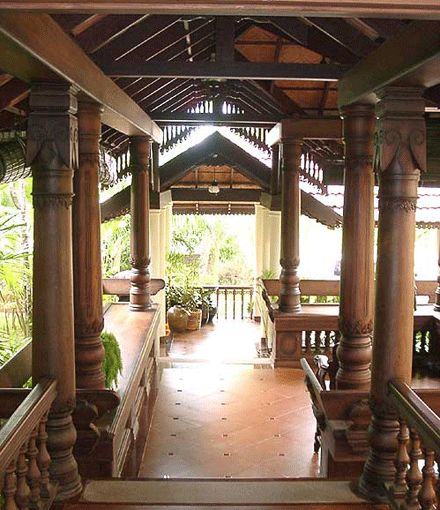 As per Vaastu, water bodies balance the energies of the house. According to Kerala architecture, every house has a pond situated at the end of the chuttu veranda, an open passage. Traditionally, this pond was built with rubble and was used for bathing. Today, these ponds add to the beauty of the house with lotus and lilies.

Interiors in traditional houses of Kerala

Traditional houses in Kerala are known for their sturdy wooden furniture and intricate wooden carvings. Even today, traditional handicrafts of Kerala like wooden seating with fewer cushions, oversized chairs, four-poster beds, and recliners made of wood in the dark polish, are popular all over the world. Homes may also have teak or rosewood swings – oonjal – in the veranda or the centre of the living room. The walls are decorated with ethnic art and antiques made from teak, sandalwood and mahogany. Decorative brass items like nettur petti (traditional jewellery box), earthen pots, and dark-toned metal items adorn traditional houses. Traditional metalwork of Kerala like hanging bells, brass lamps (nilavilakku), and idols of Lord Ganesha, Goddess Lakshmi, Nandi bull, and elephant also decorate the interiors. Ornamental brass locks called manichitrathazhu adorn the double-door entrance. Kerala’s mural art made with natural pigments is a significant feature in Kerala homes and portrays stories from Indian mythology. 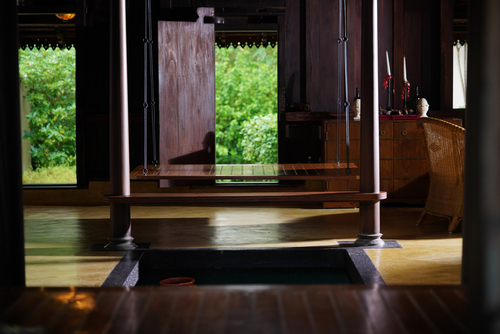 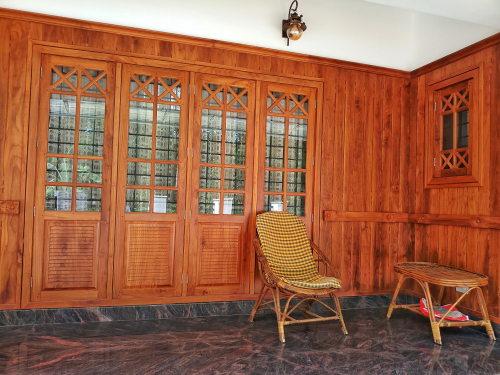 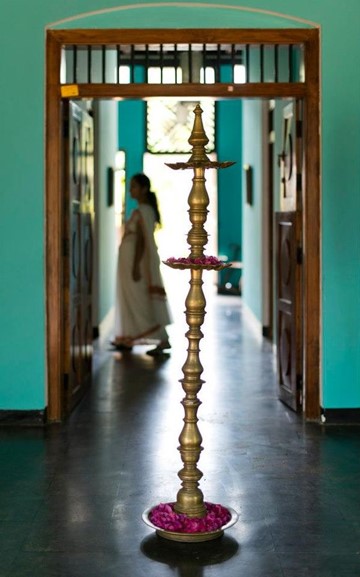 Modern houses in Kerala have incorporated many features of the traditional Kerala homes, especially open architecture and spacious floor plans, and nalukettu style of architecture like the sloping roof, a small veranda supported by tall pillars, and a mini courtyard in the middle. Besides homes, the traditional house design has also inspired hotels, restaurants and spas. The contemporary house designs modify certain features as per the modern lifestyle. Traditional elements such as wooden furniture, pillars and courtyards are part of modern houses in an evolved structural design. Advantages of traditional houses of Kerala

There are many advantages of traditional Kerala architecture. Natural and local materials are used that improve durability and encourage a higher level of detail and craftsmanship. These are also more cost-effective. Local materials such as laterite stone, wood, clay, bamboo, and granite are some of the locally available materials that are easily accessible and sustainable. Traditional Kerala houses use granite slabs below the ground to avoid dampness. Thatch and clay tiles on the sloped roofs help keep the house dry. Traditional houses of Kerala are energy efficient and are built in harmony with their natural surroundings. For maximum natural light and air passage, courtyards, walls and internal partitions are designed to induce continuous air movement and cross-ventilation.

What are the other names of traditional houses of Kerala besides nalukettu?

The nalukettu houses are also referred to as tharavadu, kovilakam, kotare, meda or illam.

What was the flooring made of in traditional houses of Kerala?

Red-oxide flooring is known to have been part of many houses This flooring is also known as kaaviyidal. Clay tiles and wooden flooring were also common in traditional houses.

Which wood has been used in traditional houses of Kerala?

Teakwood and wood of jackfruit tree were used for the construction of the doors and windows.

What is Tulsi Thara in the traditional house of Kerala?

Tulsi Thara is a stone platform in front of traditional Kerala houses where the holy basil (tulsi) is planted. 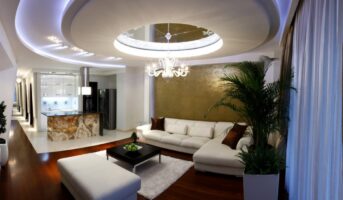 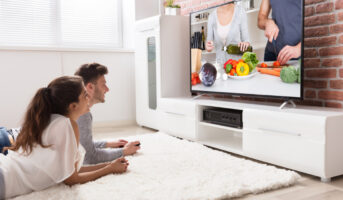 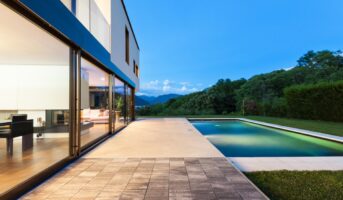 All you need to know about Elon Musk’s real estate assets. 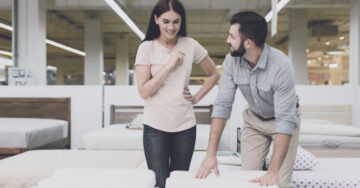 Men’s participation in household decisions on the rise: Survey. 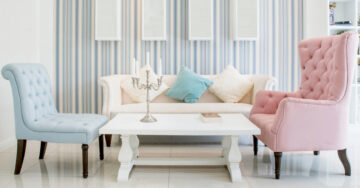