Noida (New Okhla Industrial Development Authority), a satellite city of Delhi, which is part of the National Capital Region, has changed a lot in the last decade, says Suhasini Paul, a well-known toy designer. Paul has been living near the Noida Expressway since 2005.

“Connectivity, owing to the existing road network in Noida and Greater Noida, has improved with the rising number of information technology offices in this region. Compared to a few years ago, commuting to Delhi, Gurugram, etc., is a lot easier now. The eight-lane Delhi-Noida-Direct Flyover has boosted connectivity to Delhi, while the Yamuna Expressway, the metro rail line and various taxi services, have made commuting easier. Overall, the infrastructure has improved in big way, in the last decade. However, air pollution and clean drinking water are major issues for residents in Noida,” says Paul, a post-graduate of the National Institute of Design (NID) who has done her specialisation in toys and children’s products. She is also an electrical engineer and has done a management program for women entrepreneurs, from IIM Bangalore.

Paul points out that Noida has plenty of housing options, including luxurious gated communities. “As Noida faces power supply issues, the residential areas have power backup. The complex that I reside in, has 100 per cent power backup, which means one can even run air-conditioners with this backup. The building also has a reverse osmosis (RO) plant, for the supply of drinking water. Besides these, the complex has the facilities of an in-house plumber and electrician. Other amenities include a pool, a gym and clubhouse.

“What I like best about Noida, is the greenery all around. It has many gardens and parks and of course, the golf course, which makes the place relaxing. Law and order continues to be a concern, especially after sunset, as the city is deserted and safety is a concern. What I dislike most about Noida is the rising air pollution and in winter, people with asthma have a tough time,” Paul explains.

Noida has the Jaypee Hospital, Kailash Health Care and Max Multi-speciality Fortis. There are various CBSE and international schools, as well as the UP Technical University, Amity University, MTU (Mahamaya Technical University) and other technical and B-schools, in Noida. When it comes to shopping and entertainment options, residents can choose from malls such as the DLF Mall of India, The Great India Place, Garden Galleria, the Spice World Mall, Atta Market and also Sector 18. Various restaurants and cafés offer a variety of cuisines. The sectors are clean, have good pavements to walk on and the market areas are well-demarcated, Paul elaborates.

While infrastructure has improved a lot, Paul feels that the real estate market remains sluggish and property rates have come down by 25 per cent, in the last five years. “I have lived on rent here for a few years, as the possession of our flat was delayed, due to the National Green Tribunal’s (NGT’s) ban on construction in August 2013, for housing complexes which were located within 10 kilometres of the Okhla Bird Sanctuary. The ban has now been removed, after the NGT issued clarifications.

“In Noida, most of the sectors have well-laid residential sections, with flyovers and wide roads. Noida has now expanded to Greater Noida and it has easy access to NH-24, which helps residents of Ghaziabad, Meerut and Moradabad. It is also connected to Faridabad and Gurugram, through the FNG (Faridabad-Noida-Ghaziabad) Expressway, which has cut down the travel time to Delhi. With several infrastructure developments in Noida, one hopes it will eventually lead to an increase in real estate prices,” concludes Paul. 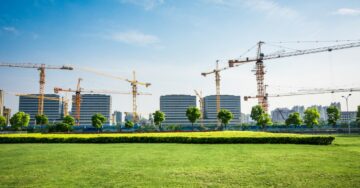