A National Green Tribunal (NGT) bench, headed by justice Raghuvendra S Rathore, on April 4, 4018, said that it was satisfied that all the concerns and suggestions, which the applicant had raised, regarding the construction of an international exhibition-cum-convention centre (IECC) at Dwarka, have been examined and considered, thereby, paving the way for the project to proceed. The Ministry of Environment and Forests and the Department of Environment of the Delhi government, had examined the impact of the project on the environment and imposed necessary conditions to mitigate the adverse consequences, the NGT noted. “In view of the above, the original application filed by the applicant has to be rejected,” the bench said.

The tribunal had earlier issued notices to the Ministry of the Environment and Forests, the AAP government, the Delhi Mumbai Industrial Corridor Development Corporation and Delhi Pollution Control Committee, on the plea alleging felling of trees for the Rs 26,000-crore project. The tribunal was hearing a plea filed by city resident Shobhit Chauhan, seeking a complete review of the project, to protect trees from being chopped.

“Issue appropriate guidelines, in order to lay down a procedure for compensatory plantation in urban areas and to consider ‘green’ and environmental friendly alternatives to afforestation. Direct an independent team of the Environment Ministry and the Department of Environment of the Delhi government, to assess the number and size of tree species and other bushes/shrubs actually present on the ground on the said lands and the number of trees that can be transplanted and conduct a satellite baseline assessment,” the plea had said.

The IECC, which is coming up in Sector 25 in Dwarka, will be able to host 5,000 to 10,000 delegates. It will take an estimated 15 minutes to reach the centre, from the international airport. 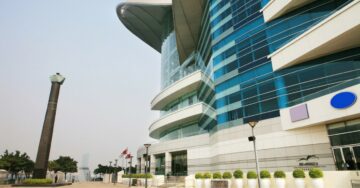