Navi Mumbai was conceived as a satellite city to Mumbai. With reports of the city having a literacy rate of 98%, an average income of Rs 25,000 per month and 64% of the households owning vehicles, Navi Mumbai has huge growth potential. The presence of several established nodes and many newer areas opening up, mean that Navi Mumbai is no longer in the shadow of Mumbai. Panvel is arguably one of the strongest nodes of the city, responsible for this sea change.

From Old Panvel to New Panvel

Growing rapidly over the past five years, Panvel has evolved from the Old Panvel areas to extend to New Panvel, which has large luxury townships and established medical and educational facilities. The first municipal corporation in Raigad district came up in Panvel and this helped to transform the place. “10 years ago, Panvel was neglected by home buyers and would get attention only from people who had budget constraints. The tables have turned today. The sky is the limit when it comes to budget, as the region offers an array of configurations from studio apartments to villas, with property prices in Panvel in the range from Rs 10 lakhs to Rs 55 crores,” says Jay Mehta, a property consultant. Panvel now has a cosmopolitan character. Major schools like Delhi Public School, Ryan International, universities like Amity and major hospitals like Panacea and Life Care Multi-Speciality Hospital, have come up near the Palaspe Phata. Additionally, grocery outlets like Reliance Smart on Palaspe Phata add to the convenience for residents.

The new international airport at Navi Mumbai, is likely to bring the biggest change to Panvel. Traditionally, airports are built inside cities but cities built around airports, also known as ‘aerotropolis’ are gaining traction over the last decade. There have been many success stories, including Amsterdam’s Schiphol, Paris’ Charles de Gaulle, Dubai, Incheon and Memphis. The Navi Mumbai Airport could be next. “With 370 sq kms of the Navi Mumbai Airport Influence Notified Area (NAINA) being planned with Panvel at the heart, the landscape will drastically change in the coming years. Work on the Navi Mumbai Airport is now starting and the road leading to the airport is almost complete now,” says Mayur R Shah, MD, Marathon Group and former chairman, MCHI-CREDAI. The airport will reduce congestion at Mumbai’s Chhatrapati Shivaji Maharaj International Airport and bring economic growth, planned development and more employment opportunities to Panvel.

Other infrastructure developments that are likely to benefit Panvel include the 21.8-km Mumbai Trans-Harbour Link (MTHL) connecting Navi Mumbai to Mumbai, which will be the longest sea-bridge in India. Additionally, work is underway, to introduce air-conditioned railway services on the Panvel-CST route and develop a metro rail route, connecting several nodes in Navi Mumbai. The expansion of the JNPT and the presence of a number of SEZs around Panvel, augur well for employment opportunities. Experts point out that with the increase in connectivity options, there are more people travelling to Panvel every day, with respect to work. NMMC bus services and the presence of autos and taxis, ensure that transportation in and around the node is comfortable. Industry experts stress that more people will show interest towards township projects near the new airport.

Check out properties for sale in Panvel

“If you look at the price trend in the Panvel property market, there was a sharp jump in Q4 2010. This was due to the environmental clearances for the airport. Gradually, as the work on the airport starts to become more visible, prices will keep rising steadily. The rental market in this area is also growing by the day. The current rental rate in Panvel for a 2BHK, is anywhere between Rs 9,000 and Rs 15,000. This is only expected to increase with infrastructure development in and around Panvel,” says Samyag Shah, director of the Marathon Group.  Panvel is also located strategically close to national highways, thereby, providing easy connectivity to neighbouring cities.

Property prices and options in Panvel

Panvel is a popular realty destination that offers projects across configurations – from affordable housing and 1, 2 and 3BHKs to penthouses and villas. According to Chetan R Shah, vice-chairman of the Marathon Group, the demand for properties in Panvel, from investors and end-users, is increasing. The Group recently launched 1BHK homes with balconies as part of phase-II of its Marathon Nexzone project, located off JNPT Road, near Palaspe Phata in Panvel. Nitesh Sharma from Ghatkopar recently invested in a 4BHK in Panvel for self-use. “Ours is a big family and we were not very happy with the small-sized units in Mumbai. After six months of scouting, we liked a project in Panvel, because of the large expanse of open space in the project, less loading and more usable space in the house. Additionally, with my son travelling to Pune three times a week, the presence of the Expressway close to the house minimises the commute time,” Sharma explains. Pankaj Singh, on the other hand, bought a 2BHK in Panvel for investment purposes. Singh says, “We were happy with the presence of reputed developers in this belt and this assured us of future growth. We booked an under-construction project and we are already seeing an appreciation in prices, even before getting possession.”

Panvel has emerged as Navi Mumbai’s key real estate market, on account of its comparatively affordable prices, infrastructure development and prospects of good future returns, by way of appreciation

April 1, 2019: Recently, Navi Mumbai was graded the second-best city to reside, in the ‘Ease of Living Index 2018’, launched by the Union Ministry of Housing and Urban affairs (MoHUA).

Also, JLL India, in their report ‘Livability Quotient – A Paradigm Shift in India’s Emerging Cities’ had identified Navi Mumbai as one of the best satellite towns, offering relief from the growing densification problems of Mumbai. This reinstates the fact that Navi Mumbai is a well-planned and managed city, at par with international and national standards.

Navi Mumbai was developed with an intent to decongest Mumbai and one node in Navi Mumbai that is developing in a similar manner, is Panvel.

“Paucity of land and rapid urbanisation in Mumbai, are resulting in a roll-on effect and directing investors to turn towards emerging areas, which could ‘peak’ in the coming years. As more locations continue to go out of the reach of a certain cross-segment of buyers, Panvel is emerging as a favourite for buyers. The government has already taken several initiatives, to build quality infrastructure in Navi Mumbai, especially in and around Panvel. This has helped developers to set up projects here,” says Navin Makhija, MD of the Wadhwa Group, which is bringing quality affordable homes to Panvel with an integrated township project, to be developed in multiple phases.

Panvel, located at the edge of Navi Mumbai, has transformed into a thriving location for real estate activity owing to excellent infrastructure and amenities, availability of natural resources and land to build futuristic infrastructure. Over the past five years, Panvel’s real estate market is witnessing an upward trend and there has been a significant rise in demand from millennials. With green surroundings and ample space, buyers are attracted towards this region, for affordable housing. “We checked out a number of options in Panvel and even in other parts of Navi Mumbai. We finally settled for the project by the Wadhwa Group, for the ample space available in this gated community, which is a relief from the claustrophobic feeling that standalone projects offer. With good amenities, excellent connectivity to other parts of the city and quality construction at a good price, we were sure that this was the best pick for us,” says Sooraj Sharma, who invested in a 2-BHK in this project.

Infrastructure and connectivity in Panvel

Panvel offers excellent rail and road connectivity to key parts of the Mumbai Metropolitan Region (MMR), including Thane, Kharghar, south Mumbai, Pune and Vashi. Connected to both, the central and western lines of the suburban railway network, it is also known as the gateway to the Konkan region. Located close to the Mumbai-Pune Expressway and the Sion-Panvel Highway, commuting to either Mumbai or Pune, is convenient.

The proposed Mumbai Trans-Harbour Sea Link (touted as the longest sea link) boost connectivity further. Also, the proposed 140-km Virar-Alibaug Multimodal Corridor (VAMC), which is divided in two phases (90 kms Phase-I from Virar to Panvel and 50 kms Phase-II from Panvel to Alibaug) is expected to take off soon. This Rs 100-billion project is expected to help commuters to reach from Virar to Alibaug, within a couple of hours. These infrastructural developments, will fast-track the transformation of Navi Mumbai into a developed city.

“With the recent announcements like the Goregaon-Panvel local train, which is set to become operational, the conversion of the freight line between Panvel to Karjat into a passenger line and the Navi Mumbai Airport, which is expected to be functional by 2021, connectivity to Panvel will improve significantly. These developments have led to a frenzy of enquiries about properties in the vicinity. The proposed NAINA city (Navi Mumbai Airport Influence Notified Area) by CIDCO, which is in the works, is another factor adding to the increased interest,” says Makhija.

Panvel has also emerged as a commercial hub, due to the presence of several corporate houses. The wide range of job opportunities in Panvel, thus, have a positive impact on real estate development.

“The development of SEZs, among other proposed infrastructural projects, will create numerous employment opportunities. This will have a domino effect, resulting in an increase in the demand for residential properties in the area. With its natural backdrop, world-class infrastructure and futuristic infrastructural developments, Panvel is seeing an upward trend in real estate. With the government’s thrust towards affordable housing, Panvel has emerged a prominent location in this category,” explains Rajat Johar, head, residential services, CBRE India. 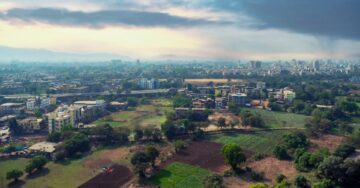 Panvel: Planned development and infrastructure make it a realty hotspot.

[fbcomments]
For any feedback, write to us at editor@housing.com.
https://seo.housing.com/api/v1/housing_news?tags=affordable%20housing,CBRE%20India,CIDCO,JLL%20India,Marathon%20Group,Mumbai%20Trans-Harbour%20Sea%20Link,Mumbai-Pune%20Expressway,Navi%20Mumbai,Navi%20Mumbai%20Airport%20Influence%20Notified%20Area,Navi%20Mumbai%20International%20Airport,Panvel