Home » Property Trends » All about the Purvanchal Expressway

If connectivity networks are telling signs of a state’s economic progress, the Uttar Pradesh (UP) government has been taking significant efforts to upgrade its road networks. The upcoming Purvanchal Expressway, set to be launched by October 2021, is a case in point. One can expect the launch to take place even before that, if officials are to be believed.

“The project, despite the first and second wave of COVID-19, will be completed before the original schedule, between June 15 and 30, 2021,” Awanish Kumar Awasthi, UPEIDA CEO, recently said.

The Purvanchal Expressway is one of the four six-lane access-controlled expressways (the Bundelkhand Expressway, the Gorakhpur Link Expressway and the Ganga Expressway being the other three) that are likely to remarkably transform Uttar Pradesh, making it the state with the largest expressway network in India. Upon completion of these four expressway projects, Uttar Pradesh will boast of 1,788 kms of expressways, the highest in the country.

Estimated to cost Rs 22,496 crores, the Purvanchal Expressway will not only connect several central districts of the state with the eastern ones but also place these districts in a direct road connectivity network leading to the national capital Delhi. The expressway, with seven bridges and 22 flyovers also boasts an airstrip that would allow emergency landing of flights.

To be developed by the Uttar Pradesh Expressway Industrial Development Authority (UPEIDA), the six-lane access-controlled Purvanchal Expressway was earlier expected to be completed by March 2021. However, the second wave of the Coronavirus pandemic, which has forced Uttar Pradesh to introduce fragmented lockdowns, could delay the works – over 80% of the work is complete so far and the final deadline for its completion has been extended to October 2021.

In October 2015, the Yogi Adityanath-led government in Uttar Pradesh relaunched the previous government’s Lucknow-Azamgarh-Ballia Expressway as the Purvanchal Expressway. In July 2018, prime minister Narendra Modi laid the foundation stone for the expressway in Azamgarh.

The 343-km highway will start at Chand Saray village on the Lucknow-Sultanpur road and pass through Barabanki, Amethi, Sultanpur, Ayodhya, Ambedkarnagar and Mau, and terminate at Ghazipur’s Hyderia village. The expressway will not only reduce the travel time between Ghazipur to Lucknow by half – from 12 to six hours – but also provide direct connectivity from these cities to the national capital. Once completed, it would be only a 10-hour drive from Ghazipur to Delhi.

Recall here that Uttar Pradesh’s capital Lucknow is already directly connected with Delhi through the Noida-Greater Noida Expressway, the Yamuna Expressway and the Agra-Lucknow Expressway.

A proposal is also in the works, to connect the Purvanchal Expressway with Bihar from Ghazipur.

See also: All you need to know about the Delhi-Mumbai Expressway The completion deadline for the Purvanchal Expressway is October 2021 but it may be ready by June-end, 2021. 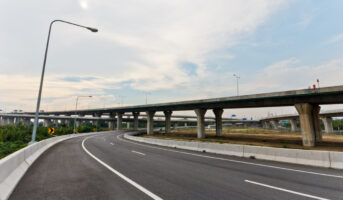 All you need to know about the Bundelkhand Expressway. All you need to know about Ganga Expressway.