Home » Must Knows » Legal » All about builder-buyer agreement: Here’s why you should thoroughly read it

Critics have varying opinions about India’s real estate act (RERA), which was enforced in 2017 with much fanfare. Many said that this Act had the potential to cure all the ills afflicting India’s residential real estate. In spite of a weak start, the law has certainly laid the ground for safeguarding buyers’ interests. The law has, for example, made a huge change in the manner in which builder-buyer agreements in India are drafted.

A recurring complaint among home buyers was that builder-buyer agreements were invariably drafted in a manner that benefited only the builder. It had arbitrary and unclear clauses that either blatantly favoured the developer or gave him the benefit of doubt, because of the total absence of clarity over the matter.

Petition in the SC over model builder-buyer agreements

Although builder-buyer agreements have to comply with several provisions under the state RERA, this document is still far from being impartial, as far as home buyers’ safety is concerned. In fact, a petition has been filed in the Supreme Court to direct the government to come up with a model builder-buyer agreement and a model agent-buyer agreement. In his petition, BJP leader and lawyer Ashwini Kumar Upadhyay has said that the model documents should be drafted in such a way that they comply with the spirit of the Real Estate (Regulation and Development) Act, 2016 (RERA) and Articles 14, 15 and 21 of the Constitution.

“Directions must be given to compensate the buyers for losses incurred due to inordinate delays on the part of promoters and to recover the money, misappropriated by promoters and agents under the garb of taxes, interests, penalties and other charges,” Upadhyay said in his petition, adding that all states must enforce the model documents to ensure buyer safety.

During a hearing on February 22, 2021, the SC said that at least 20 states have already come up with a model builder-buyer agreement and gave the petitioner time to gather concrete information on the matter. The top court also clarified that the union can not come up with a uniform model, as land was a state subject.

Let us first examine the terms and conditions in builder-buyer agreements prior to RERA and the problems it posed.

This clause helped builders to raise the price of the property, as and when they needed. Even if a project had been delayed, they could raise the cost, claiming that raw material and other input costs had increased. The buyer had no way of resisting the double trouble of delay and higher costs.

The agreements also included a clause allowing the builder to change the sq ft area of the apartment. In case of an increase, builders could ask for extra money from the buyers. “Even if the super area increased, you had to pay 10%-15% extra, while the benefit to you, in terms of the additional area, would be marginal or nil,” explains Anuj Sood, head of Noida-based Sood Properties.

Builder-buyer agreements also included a penalty clause, to be invoked if the buyer delayed in paying an installment. The charge could be hefty – as much as 18%-24%, compounded quarterly. Some developers went further and included clauses that allowed them the right to cancel the allotment and forfeit the earnest money, which could be as high as 20%-25% of the total cost, if the buyer delayed payment beyond a point. The balance would be returned, without any interest.

See also: Tips to verify your flat purchase documents without a lawyer

The agreements also talked about the buyer being liable to pay for certain facilities, on an actual cost basis, at the time of taking possession. The buyer would then be in for an unpleasant surprise, if the builder demanded an unexpectedly high amount for facilities such as club membership, electricity connection charge, etc. Similarly, at the time of booking, there would be no specific mention of the PLC (preferential location charges). This charge, depending on what the builder deemed fit, would be imposed on the buyer at the last minute.

Developers often drafted the builder-buyer agreement in such a way that they enjoyed the legal freedom to change the building’s plans and get away with it without having to pay any penalty.

This clause in agreements used to state that the buyer had to pay the developer a ‘transfer charge’, if the apartment was resold before the buyer took its possession. No disclosure was, however, made about what kind of amount the buyer would have to pay.

Also see: What can buyers expect in the post-coronavirus world? 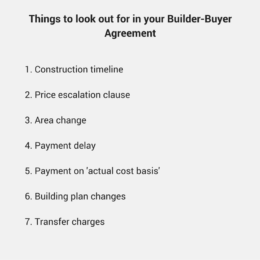 Considering that agreements that favoured builders were a key pain-point for the buyer community, the real estate law tried to address this, by laying the ground rules for drafting and executing builder-buyer agreements, referred to as agreement to sale in the Real Estate (Regulation and Development) Act, 2016. An agreement for sale, according to the law, refers to an agreement entered into between the promoter and the allottee.

Also see: Difference between agreement for sale and sale deed

Builder has to submit agreement pro-forma

While registering a project, a builder has to submit, along with his application and other documents, the pro-forma of the allotment letter, agreement for sale and the conveyance deed proposed to be signed with the buyers.

Builder-buyer agreement is the guiding document

The law states that the builder will have to carry out his responsibilities as mentioned in the agreement to sale.

A developer cannot ask for more than 10% of the property’s value from the buyer, at the time of signing the builder-buyer agreement. The parties are legally bound to register this agreement, to provide it legal validity.

Section 13 (2) of the law prescribes that the builder-buyer agreement contain each and every detail, leaving little scope for confusion in terms of the builder’s responsibilities.

“The agreement for sale shall specify the particulars of development of the project, including the construction of building and apartments, along with specifications and internal development works and external development works, the dates and the manner by which payments towards the cost are to be made and the date on which it is to be handed over, the rates of interest in case of default, and such other particulars,” says the law.

If a builder has promised a certain facility in the builder-buyer agreement, he is legally obliged to provide it. If he fails to do so, the buyer can, within five years of getting the possession, point this out to him and he will have to rectify the mistake in a month’s time.

“In the event of the promoter’s failure to rectify such defects within such time, the aggrieved allottees shall be entitled to receive appropriate compensation in the manner as provided under this Act,” says the law.

Even otherwise, if the promoter fails to discharge any obligations imposed on him under the terms and conditions of the agreement for sale, he is liable to pay a compensation.

Also, after the builder executes an agreement for sale, he cannot mortgage or create a charge on such property. If that were to happen, it would have no impact on the buyer whatsoever, says the Act.

Also see: Maintenance charges that buyers need to be aware of

Builder-buyer agreement must be considered as flat allotment date: SC

The period of allotment of a housing unit to a home buyer has to be considered from the date of the builder-buyer agreement and not from the date of registration of the project under the Real Estate (Regulation and Development) Act, 2016, the Supreme Court has ruled. “It is relevant to note that even for the purpose of Section 18 (of RERA), the period has to be reckoned [with] in terms of the agreement and not the registration,” the apex court said.

How to draft a builder-buyer agreement

While the law makes it mandatory for the builder to follow specific rules while drafting and executing a builder-buyer agreement, the buyer still has to still show utmost caution, while reading the terms and conditions.

First and foremost, they have to make sure that the agreement is drafted in the manner and form as prescribed by the RERA and it is also registered with the state authority (this may not be the case for resale homes, or apartment with less than eight units, as they do not fall under the ambit of the RERA).

Also see: What is force majeure clause in real estate?

After the RERA, builders are mandated to draft and execute the builder-buyer agreement, in line with the provisions laid under the home buyer-specific law. This point has been reiterated by various courts in India, time and again. For the convenience of our readers, we are attaching a builder-builder agreement sample, modeled by the Madhya Pradesh RERA.

What is builder buyer agreement?

A builder-buyer agreement is a legal contract that contains the terms and conditions that the buyer and the builder have to comply with.

To safeguard one’s interest, the builder-buyer agreement should be executed and registered after payment of the booking amount.

An agreement to sell that is not registered is not admissible as evidence in the court of law.

5 important things to check before booking a flat.

Should you believe all marketing brochure claims?.

Delhi HC’s ruling on no service tax: How it affects home buyers.